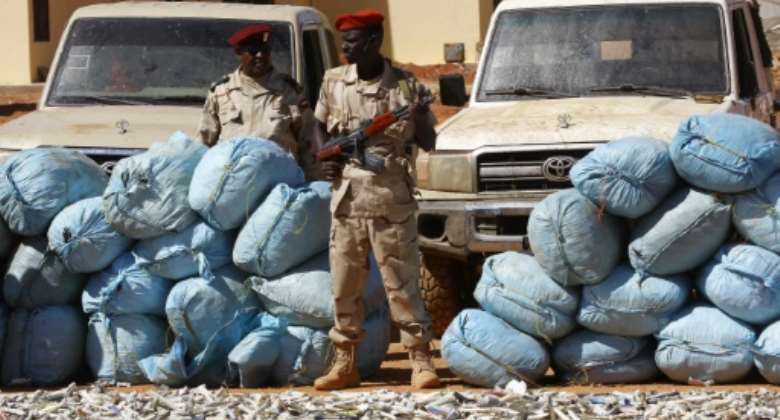 Members of Rapid Support Forces (RSF), Sudanâ€™s controversial counter-insurgency unit, show on November 5, 2017 in Khartoum sacks of hashish that were captured in the state of South Darfur a week earlier. By ASHRAF SHAZLY (AFP)

A controversial Sudanese counter-insurgency unit said Sunday it had seized 19 tonnes of hashish in war-torn Darfur, in one of the largest hauls ever reported in Sudan.

On Sunday, the security forces showed tonnes of seized cannabis to reporters at an RSF camp in Khartoum.

Dozens of blue plastic sacks full of hashish were on display, while some was spread out on a carpet in the compound of the camp.

"On Tuesday, October 31, our troops clashed with a gang of smugglers when we ambushed them," RSF spokesman Abdulrahman al-Jaali told reporters.

"We captured their chief... and seized two vehicles loaded with 189 quintals (19 tonnes) of hashish."

The RSF unit ambushed the smugglers after intercepting their telephone communication with another gang in Khartoum, indicating that the seized drugs were bound for the capital, he said.

"This hashish is usually grown in South Sudan and also comes from Ethiopia, and these days it is also grown in Radoum (in South Darfur)," police General Hashim Ali said at the press conference.

In recent years the Sudanese media has regularly reported security forces seizing hashish and other narcotics, but the latest seizure is clearly one of the biggest-ever hauls reported in the east African country.

Officials have acknowledged an overall rise in drug trafficking and consumption across the country in recent years, especially among young people.

Global rights groups accuse RSF of human rights abuses in areas where it is fighting rebels like Darfur, Blue Nile and South Kordofan.

The three conflict zones have witnessed intense fighting between government forces and rebels for years that has left tens of thousands of people killed and millions displaced.