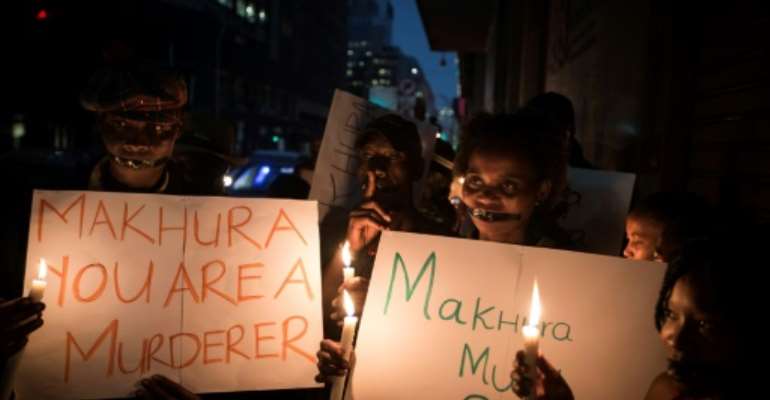 Relatives of mentally ill patients who died after being moved out of a hospital hold a candlelight vigil in Johannesburg. By GULSHAN KHAN (AFP/File)

Weeks of gruelling testimonies at an inquiry in South Africa have tried to answer an unfathomable question -- how authorities allowed 141 mentally-ill patients to die after being moved out of a hospital.

The evidence presented has been a litany of neglect, incompetence and cruelty that lawyer Dirk Groenewald described as "the greatest human rights violation since the dawn of democracy" in South Africa.

Every day, families of the victims have told shocking stories of how their loved ones were taken from the hospital, badly mistreated at unlicensed health facilities and then died.

Starting last February, more than 1,700 patients were rapidly relocated from the Life Esidimeni hospital in Johannesburg to 27 privately run clinics that were unable to care for them.

The Gauteng provincial health department cancelled its contract with Esidimeni as a cost-cutting measure.

"One day my sister went to go see our mother, but was told she was moved. Nobody contacted us," Boitumelo Mangena, 24, told the inquiry in just one of many harrowing personal accounts.

"My brother found her (at a clinic). She lost a lot of weight. She hadn't been bathed for a while, I could tell it from the smell.

"All the patients were getting the same medication but my mom's meds were very specific to her condition." 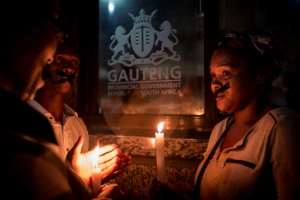 A vigil outside the offices of the Gauteng health department, which cancelled its contract with Esidimeni hospital

Mangena's mother, who suffered dementia, died three weeks after being moved from Esidimeni to one clinic and then another in Soweto.

"The cause of death was cardiac arrest and epileptic fit. My mother was never epileptic. We discovered she had been starved and dehydrated to death," she said.

"These people were sent to their death and they died in the most horrible way possible, they were tortured to death.

"I was thinking we could get some answers so we can heal, but that didn't happen. Nobody wants to be held liable."

An earlier official investigation, which sparked uproar in South Africa, detailed how confused patients were hurriedly removed from the hospital and taken to care centres that were often overcrowded and unheated.

Staff were untrained, the facilities were ill-equipped, and patients were left far from their families, who didn't know where they were.

Joseph Maboe, a pastor, told the inquiry that he went to Esidimeni to visit his son Billy, who was epileptic, but found he had already been transferred.

Instead Maboe watched other patients being moved in "big trucks".

"They were just like goats and sheep taken to an auction," he said.

Maboe said that "Billy was very happy to be there (Esidimeni)" but later he found his son at a clinic outside Pretoria looking "frail, filthy, hungry and disorientated".

"He asked for water and they said they couldn't give it to him because he wets himself," he said.

"When we are shattered like this, what can we say to the government? They don't care," Maboe said.

'Irrational, rushed and not necessary' 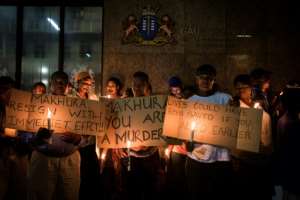 Evidence at the South African inquiry has been a litany of neglect, incompetence and cruelty

In another distressing testimony, Sandra de Villiers said that "not even an animal would be treated" like her brother Jaco Stols was at the clinic he was taken to.

She said she believed he was sleeping on the floor in thin clothes.

"He was very dehydrated. He was badly underfed," she said. "I would take him a pair of slippers, and the next time I went to visit, they would be gone."

Adila Hassim, a lawyer representing the families, summed up the tragedy as "a sorry tale of extreme neglect, insufficient or rotten food, exposure to cold, lack of medication, overcrowding, abuse, death and late notifications of death".

She said some families had even told of searching through bodies stacked on one another at the mortuary to find their lost loved ones.

Faced with the torrent of grim stories, the provincial health authorities apologised at the ongoing compensation inquest in Johannesburg.

"It was all irrational, it was rushed and not necessary. It was not urgent, but we did it," Levy Mosenogi, chief planning director for the Gauteng health department, said, tears rolling down his face.

Many officials have pointed to former Gauteng health minister Qedani Mahlangu as the chief architect of the botched relocation plan.

Mahlangu has promised to testify at the commission but has not yet been available, saying she is currently studying in London.