Law Of Mortgages In Ghana Outdoored 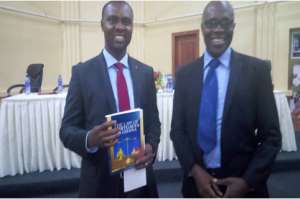 A book titled ‘’ The Law of Mortgages in Ghana’’ has been launched with a call on players in the financial and legal sectors to pay critical attention on mortgaging and its ramifications.

The ten chapter book authored by Lawyer Godwin Djokoto, a lecturer at the University of Ghana Law School is expected to fill the void in legal landscapes due to the absence of a book solely devoted to discussions on mortgaging in the country.

Launching the book in Accra on Wednesday, Justice Sulemana Nasiru Gbadegbe, a Supreme Court Judge expressed his satisfaction with the simple use of language by the author which makes the book easy to read and understand

The Supreme Court Judge also welcomed the choice of title chosen for the book which he added has come at a time when mortgaging plays important roles in both the formal and informal sectors of Ghana respectively.

The newly launched book according Justice Sulemana Gbadegbe will not serve as a reference point for players in the mortgage industry but to all employers and employees from different industries since mortgaging now cut across different endeavors.

He referred to the launching of the book as a time to celebrate the author which also signifies the realization that has taken a long time to materialize.

On his part, the author, Mr. Godwin Djokoto, noted that his experience as a bank lawyer and as a lecturer at the University of Ghana Law School offered him the opportunity to be able to author the mouthpiece.

He added that the newly launched book furnishes readers with many Ghanaian cases studies which are truly adapted to the Ghanaian situation.

The book amongst others seeks to explore the historical contours of mortgages tracing its evolution from ancient Roman times through its development in English law and how it was received in Ghana as a legacy of colonization as well as the statutory interventions in Ghana.

Mr. Godwin Djokoto pointed out that the ‘’ Law of Mortgages in Ghana ‘’ further discusses the various ways in which a mortgage may be created under the Ghanaian law legally, equitably and customarily.

He called on mortgagers particularly the banks and financial institutions to be very diligent in concluding mortgage transactions and to make the credit appraisal system more rigorous. ‘’They must pay proper attention to the identity of mortgagors and borrowers in third party mortgages’’.

The Author further urged mortgagors to be very careful and weary of conditions stipulated in mortgage agreements and also seek advice when they are in doubt.

He expressed his appreciation to his reviewers and all those who played divergent roles in ensuring the realization of his dream.

The launching brought together people from the judiciary, academia, clergy, and players from financial and insurance industries as well as the media.