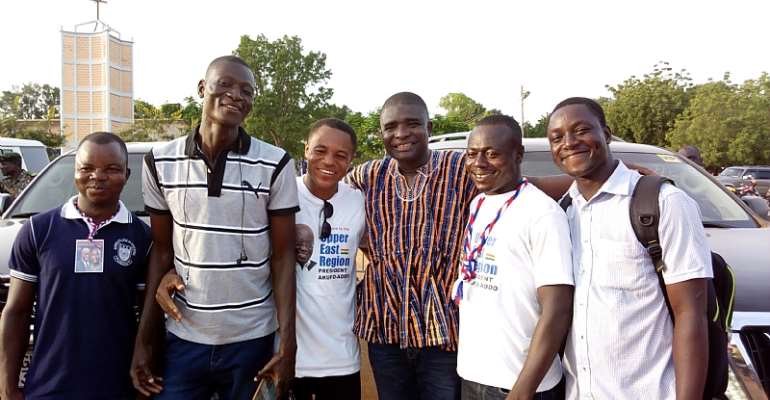 Kamal Deen with some youth in northern Ghana

Kamal Deen Abdulai, the National Nasara Coordinator of the ruling New Patriotic Party and a National Youth Organiser hopeful has advised the youth of the three Northern Regions to take education seriously since that is the main panacea to personal success and to bridge the development gap between the North and the South.

According Kamal Deen, the era where the northerner was regarded as only interested in things that retard development is long gone and so the people should seize every available opportunity to enhance their education.

Kamal Deen who is with the president on his 7days visit to the three Northern regions was speaking to the Media on the need for the people to embrace education.

EMBRACE FREE SHS
Commenting on the government’s free SHS policy, Kamal Deen advised parents and school going children in the Northern part of Ghana to embrace the Free SHS policy introduced by the Nana Addo Dankwa Akufo Addo led government since that is the panacea to changing the lives of the people.

The three Northern Regions have been enjoying some form of Free Secondary School education since the Kwame Nkrumah era till date. However the form of free SHS initiated by the Akufo Addo government look more comprehensive as it covers some other components of the school fees which the earlier Northern Free SHS didn’t cover.

He has therefore admonished the people not to pay heed to the needless propaganda peddled by detractors of the policy against the program and know that they will be the beneficiaries of the program in the long term.

“Do not listen to the naysayers. The program has come to stay and it is intended to salvage our educational system and change our lives. Your people will be the ones to benefit. Do not let the propaganda against it make you lose hope in it.” He advised.

APPEAL
He used the opportunity to appeal to northerners who are in the current government to use their positions to help serve as mentors to the young ones and help propagate the need for the youth to be educated to the people.

He pleaded with the northerners in the government such as Hon. Kofi Adda, the minister for Water Resources works and sanitation, Hon. Dr. Amin Anta, deputy minster of energy, Mr. Emmanuel Asigri: CEO of the National Youth Authority, Hon. Mustapha Ussif: CEO of the National Service Scheme, Mr. Hassan Tampuli: CEO of the National Petroleum Authority and several others to open their doors to their Northern brothers and sisters and always encourage them to marry education and give birth to success.

He stated that, there is no denying the fact that, there is a huge development gap between the North and the South and the only reason for which this gap can be bridged is through education and proper leadership.

He however added that whiles the government under Nana Addo Dankwa Akufo Addo is giving the country better leadership by introducing policies that make the lives of the citzenry better, it is incumbent on the people (Northerners) to take advantage of the profitable policies and enhance their livelihood by taking their education serious.