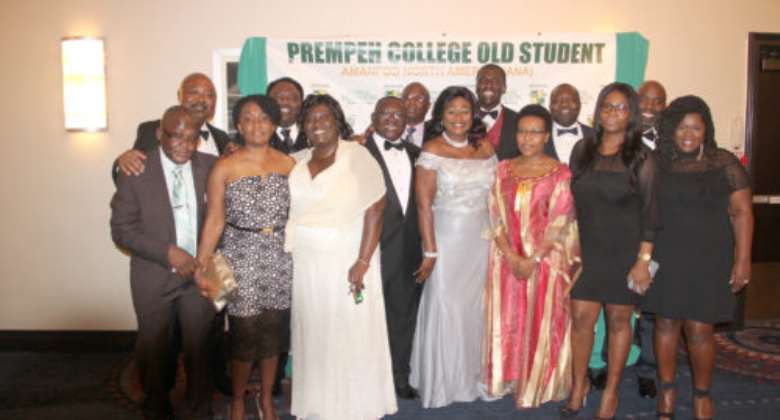 Prempeh College Alumni (Amanfoo) resident in North America converged at Springfield Virginia over the Labor Day weekend in celebration of the annual Amanfoo North America (ANA) Reunion. The theme for the event was "footprints on the sands of time", and the objective was to raise funds towards the Amanfoo North America Prempeh Endowment Fund (ANAPEF). This year's festivities was also to celebrate members of the graduating class of 1974/76 for their stellar achievements. These Seniors attended the event in their large numbers and contributed generously towards the ANAPEF.

The three day celebration began on Friday September 1st with a meet-and-greet event at the Courtyard Marriott hotel in Springfield, Virginia. Over 100 old students most of whom arrived with their families met that evening to interact and rekindle old friendships. It was heartwarming to see some Amanfoo brave the storm in Houston Texas to make it to Virginia.

The events continued on Saturday afternoon with a business meeting as Amanfoo discussed the policies and governance structure of the newly formed ANAPEF as well as ongoing developments in the school. The meeting included guest lectures on health and financial planning. Senior Dr. Adubofour of the class of the 1974/76 class gave an insightful presentation on diabetes, emphasizing patient empowerment and education. Senior Clifford Mpare (1974/76) spoke about the investment climate and opportunities in Ghana.

The highlight of the packed 3-day reunion was the fundraising dinner dance at the Hilton Hotel in Springfield Virginia. His Excellency Dr. Barfour Adjei-Barwuah, Ghana’s Ambassador to the United States, himself an Amanfoo (1960/62) was the guest of honor. Senior Yaw Asare-Aboagye (1974/76) chaired the event and he recalled with nostalgia activities in the school during the 70’s. He read a letter from the very first student admitted to Prempeh College in 1949. He entreated all Alumni to support the school.

The keynote speaker, Senior Kofi Bonner (1974/76), a real estate entrepreneur shared his experience from a recent visit to the school and expressed his disappointment over the deterioration of the school facilities. He acknowledged the excellent academic achievements of the current crop of students. Prempeh College won the 2016 edition of the World Robotics Competition held in Michigan, United States and recently won the 2017 National Science and Math Competition.

Seniors Kofi Bonner and Yaw Asare-Aboagye each made a donation of $10,000 towards the ANAPEF, setting the tone for the evening. At close of day, $86,165.80 had been raised in both cash and pledges towards the fund, bringing the total contributions raised in 2017 to nearly $90,000.00

The first ANA lifetime Achievement Award was presented to Senior Dr. Kwaku Ohene-Frempong (1964/66), emeritus professor of pediatrics at the Perelman School of Medicine at the University of Pennsylvania, and director of the Sickle Cell Foundation of Ghana. As if destiny planned it, the award was presented by no other than Snr. Bafour-Awuah, the very Snr. Dr Ohene-Frimpong reported to in his 1st year back in Prempeh College.

The thanksgiving service held on the Sunday morning was officiated by Senior Rev. Elvis Acheampong (1981/83) who pastors the congregation at the Gateway international Christian Church in Alexandria. After the service, the fun continued with a soccer match between older seniors and younger seniors at the Loisdale Park in Springfield Virginia, with the older seniors prevailing by a score of 3-1.

The festivities ended with an outdoor feast at the Courtyard Marriot hotel. Amanfoo and guests were treated to Ghanaian local dishes such as omotuo, tuo zaafi, waakye and kenkey, with chef Ghanaba grilling all evening. Amanfoo participated in various activities including table tennis, samammo and board games.

The 2017 Annual Amanfoo North America reunion was a great success with record fundraising. Prempeh College was founded in 1949 and was the first government assisted secondary school in Ashanti and Northern Sector of the Ghana.

Those in secular world live better because they work hard th...
8 hours ago