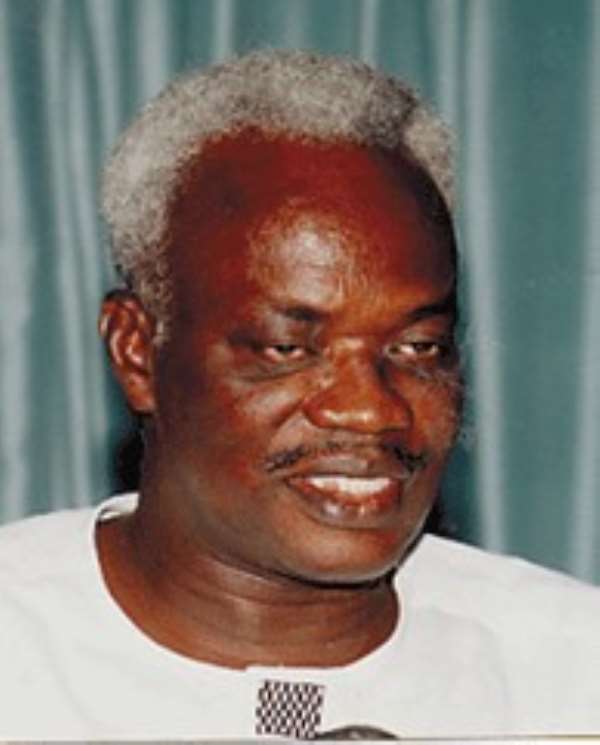 Takoradi, May 23, (Chronicle) -- A leading member of the National Democratic Congress (NDC), Mr. Ato Ahwoi, has vehemently denied the existence of any Tema Oil Refinery (TOR) debt and challenged the government to prove him wrong by publishing the audited accounts of the refinery from year 2000 up to date in the daily newspapers.

He said if after the publication of the audited accounts it is proved that indeed TOR had been saddled with a debt of ¢4.6 trillion as being trumpeted by the government, Ghanaians should call him a liar and should also not take him seriously on any comment he would make on national issues.

Speaking at the KYZZ FM 89.9 morning show in Takoradi last Thursday, Mr. Ahwoi contended that TOR was in no debt and that the government was only trying to throw dust into the eyes of the public by quoting a non-existing figure of ¢4.6 trillion, which in most of the cases, they attributed to the NDC government.

Ato Ahwoi, a former secretary for energy in the PNDC regime, further told his host, Kwame Malcolm, that TOR was currently producing petrol at a cost of ¢13, 500 and selling it at ¢30, 000 per gallon.

He noted that if after all these huge profits being made by the government, Ghanaians are being made to believe that TOR had been saddled with debts, then there was something wrong somewhere that must be investigated.

Ahwoi, who is also the board chairman of Accra Hearts of Oak Sporting Club Limited, further told his listeners that in 1999 when the then NDC government increased the petrol price from ¢4,800 to ¢6,500, then candidate Kufuor led the opposition parties to demonstrate against the increment.

He said the President at that time also demonstrated against the increase of the VAT rate.

Brandishing a copy of the 'Public Agenda' newspaper, which he claimed, reported the reason why then candidate Kufuor and his opposition parties went on the demonstration, Ahwoi regretted that today, the price of petrol had unjustifiably been increased to as much as ¢30,000 per gallon.

The current government was also enjoying from the VAT increase, which is contrary to what they had protested against, he added.

According to Ahwoi, to stab Ghanaians in the back, the NPP government had also started misapplying the huge windfall from this astronomical petrol price increase to satisfy a few individuals in the country.

He cited as an example, the buying of a brand new Landcruiser for the board chairman of the Energy Commission, Dasebre Osei Bonsu, who is also the Asante Mampong chief.

He said as if this was not enough, the Energy Commission moved from its location at the Diamond House in Accra to hire a house and paid a whopping ¢7billion as rent advance for five years when the same money could have been used to build new ultra modern offices for the commission.

Ahwoi further informed his listeners that what had even exacerbated the whole situation was the government decision to pay ¢900 billion from the exploration levy put on the petrol price to the Price Waterhouse Coopers to carry out forensic audit.

He noted that the exploration levy was meant for exploration of oil only and nothing else but this is what the NPP government is doing with our money.

Quoting from 1st Kings Chapter 21 in the Holy Bible, Ahwoi euphemistically told his host that a day would come when some people would be made to account for some of the misdeeds currently going on in the country.

The New Patriotic Party (NPP) representative on the show was not happy about the way Mr. Ahwoi lambasted the government on certain issues, especially the misapplication of state funds, when his own government had done the same things in the past.

He did not justify the hiring of the house by the Energy Commission at the cost of ¢7 billion, neither did he justify the purchase of the Land cruiser for the Mampong chief, but his concern was that Ahwoi should have been bold enough to condemn the same things that went on in his government.