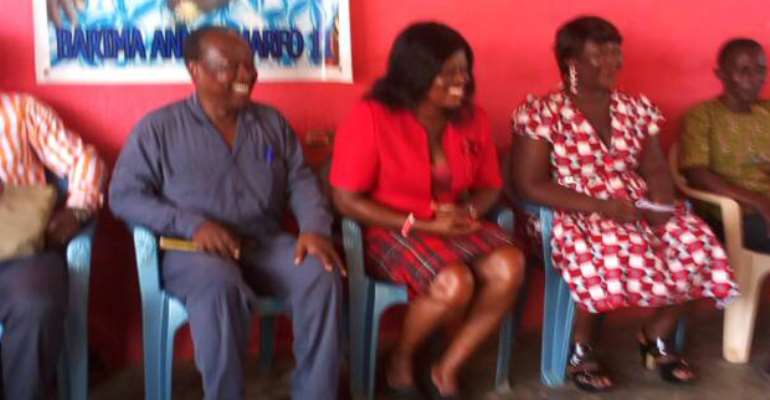 MCE with her entourage at Nankese chiefs palace

HON Margret Darko, the new Municipal Chief Executive for Suhum Assembly in the Eastern Region has kicked off a familiarisation tour within the Municipality to have a first hand information from the chiefs and the residents to aid her work.

The Municipal Chief Executive who seek to introduced herself and interacts with the chiefs has paid a courtesy call on the Traditional Rulers in the early days in her administration.

This, according to most, is the first of it’s kind considering the nature and approach of the interaction, thereby receiving a spectacular welcome by the Chiefs and Elders of the various Traditional towns.

It could be recall that just after the overwhelming endorsement of the President’s Nominee, Hon Margaret Darko by the Assembly Members and Government appointees, the newly confirmed MCE in her acceptance speech promised to work with all and sundry devoid of Political affiliation, ethnic background and Religious beliefs to develop the Municipality.

Due to that the Municipal Chief Executive decided to pay a courtesy call on the Traditional Rulers to discuss matters of concern among their people as she has managed to visited all the chiefs.

The Municipal Chief Executive, Hon Margaret Darko in her speech assured the Chiefs of involving them comprehensively in her quest for developing the Municipality.

She also assured the elders of making herself available for the purpose of checks and balances to ensure smooth administration in her tenure of office.

Mrs Margret Darko acknowledged the slow pace of development in the Municipality and assured the Chiefs and elders of her commitment to tackling projects with urgency.

She therefore admonished the Chiefs and elders of their immense support and prayers for a successful leadership.

The chiefs assured the MCE of their total support and advised her not to repeat the mistakes of the past administrations where contractors abandon projects for a long period of time and go Scots free.