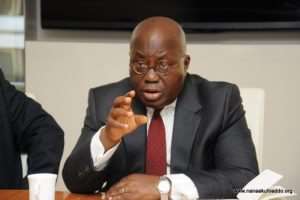 President Akuffo-Addo has expressed disgust at the mob attack on Captain Maxwell Mahama, a military officer at Denkyira Boase, Central Region, killing him on the spot.

Captain Mahama, who was with the 5th Infantry Battalion (5BN) at Burma Camp, Accra, was the head of the military detachment fighting illegal mining (galamsey) at Denkyira Boase.

Captain Maxwell Mahama, who is believed to have been killed by the youth, including some women, was jogging along the main road from Diaso to Denkyira Boase, when he was apprehended by the youth, who spotted a pistol on him.

The deceased, spotting a civilian attire, was undertaking his morning physical exercise Monday morning, when he was mistaken by the irate youth for an armed robber, when he had requested direction from some women.

Quickly, the women alerted the Assemblyman for the area who mobilised the youth in the town to grab Captain Mahama, pelted stones at him and later burnt him to death, despite his plea and identifying himself as a soldier.

The charred remains of the late Captain Mahama had been deposited at the Dunkwa Government Hospital.

Not too long after the news broke, yesterday, President Akuffo-Addo posted on his tweeter page: “My condolences to the family of Captain Maxwell Mahama on their tragic loss.

“I assure them that the perpetrators of this heinous crime will be arrested and dealt with in accordance with the laws of our country.”

The Minority in Parliament, led by its leader Haruna Iddrisu, also expressed shock and dismay at the gruesome murder of Captain Maxwell Mahama.

The Minority wondered why the officer, tasked to head the military detachment fighting galamsey at Denkyira Boase, would be lynched without any provocation.

Haruna Iddrisu said: “We condemn this act of barbarism in no uncertain terms and, therefore, implore government, as a matter of urgency, to explore all legal and legitimate means to bring the perpetrators to book as soon as possible.

“While commiserating with the Military High Command and Officers and men of the Ghana Armed Forces on this sad loss, we urge them to continue to exercise restraint as the matter is being dealt with.

“We also wish to express our sincere and heartfelt condolence to the bereaved family, especially the wife and children.”

The Public Relations officer of the Ghana Armed Forces (GAF), Colonel Aggrey Quarshie told an Accra-based radio station Tuesday morning that, a fact-finding delegation, led by the Chief of Army Staff, had been sent to the area to ascertain circumstances leading to the heinous murder of Captain Mahama.

Describing Captain Mahama as a promising young officer, Colonel Quarshie assured the public that the military would not carry out any retaliatory attacks.

He said: “That will be the last thing that somebody will want to think of at this time. This is not the time for those things,” adding, “the most important thing is trying to apprehend the people who did that unfortunate thing. And so we have to do all that we can to let the law work.”

He said they were collaborating with the police and other security agencies to bring the perpetrators to book.

He said the Armed Forces has, thus, urged its personnel to remain calm as due procedure is taken to bring the perpetrators to book.

However, on Citi News yesterday, the District Chief Executive (DCE) of the Upper Denkyira West District, Daniel Appianin, cried that a team of military men had invaded Denkyira Boasi, alleging that the military were beating up residents in the area.

According to him, the military men had taken about 80 men hostage, while women and children had been camped in a church in the town.

He screamed: “I was at the scene…they've arrested a lot of men. They've beaten a number of them.

“What happened when the robbery happened? Didn't we realize that we needed to bring security to come and protect the people? One person is dead and it is bringing the entire military to the place. This is the country we are living in.”

He added: “I've seen it myself…at least I saw about 80 men lined up on the floor. The military people were saying that unless they get their gun, they are not living them.

“I spoke to their commander. I went there with my District Police Commander, BNI and other security operatives in the district. The security men are saying they will only leave when they retrieve their gun.”

He further lamented that the issue is causing heightened tension in the town, saying “the area is almost empty.”