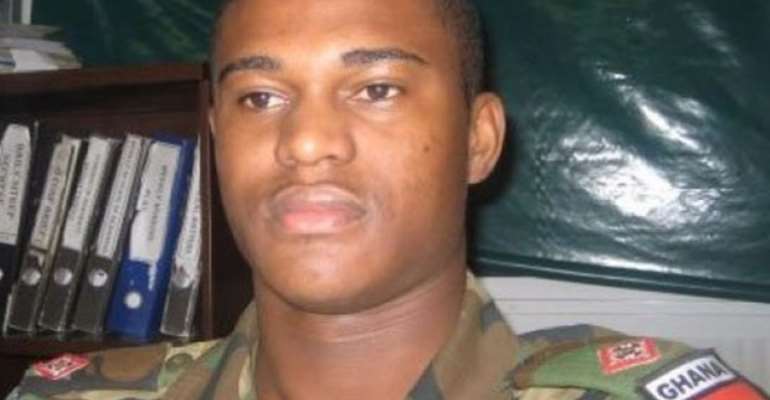 The report on investigations into the murder of Captain Maxwell Mahama is ready and the Ghana Armed Forces has pledged to follow its recommendations to the latter.

This assurance was given by the Chief of Defence Staff, Major General Obed Akwa, when he, Vice President Dr Mahamudu Bawumia, and other officers of the Ghana Armed Forces visited the family of the deceased in Accra on Wednesday May 31.

Major General Akwa also assured the bereaved family that nobody involved in Captain Mahama's death would escape justice, further urging them to disregard assertions that Captain Mahama was at Denkyira Obuasi to protect illegal mining sites.

Speaking to the family, Major General Akwa said: “He [Captain Maxwell Mahama] was on a sanctioned official duty. The High Command knew about it and our ministry is also aware, so I will like to disabuse the minds of the general populace that they were there undertaking or protecting illegal mining. That is the first important point I want to make.

“Secondly, yesterday, I dispatched the Chief of Army Staff and the GOC Southern Command, together with other officers of the Ghana Armed Forces and also our counterparts from the police service, to go and undertake some investigations on the ground.

“They've come up with their report which we are going to look at very carefully and help in the implementation. I also want to seize this opportunity to thank all officers and men of the Ghana Armed Forces for the restraint that they have exhibited in the face of this provocation.”

Major General Akwa noted that a “new image of the Ghana Armed Forces is being carved”, adding: “We don't have officers and men who will take reprisal action as perhaps was the case in the past. I like to commend all of them and to urge those who are still deployed in the operational area to live peaceably with their civilian counterparts and allow the law to take its course. As the Vice President has indicated, nobody involved in this dastardly act will escape justice, so that is the assurance I would like to give to the family.

“Tomorrow I'll be meeting all ranks in Burma Camp for an all ranks durbar to reiterate some of the points made by the Vice President and also what I've just said. It is our intention to also proceed to Takoradi to meet all ranks of that garrison to convey similar sentiments to them. I've sent the Chief of Army Staff to 4 Garrison where he will also undertake a similar exercise.”

Captain Mahama was lynched on suspicion that he was an armed robber after a group of residents from whom he asked for directions during a Monday dawn jogging session spotted a pistol on him.

The death of the soldier has been widely criticised, with President Nana Addo Dankwa Akufo-Addo, former Presidents John Mahama and J.J Rawlings leading the condemnations.