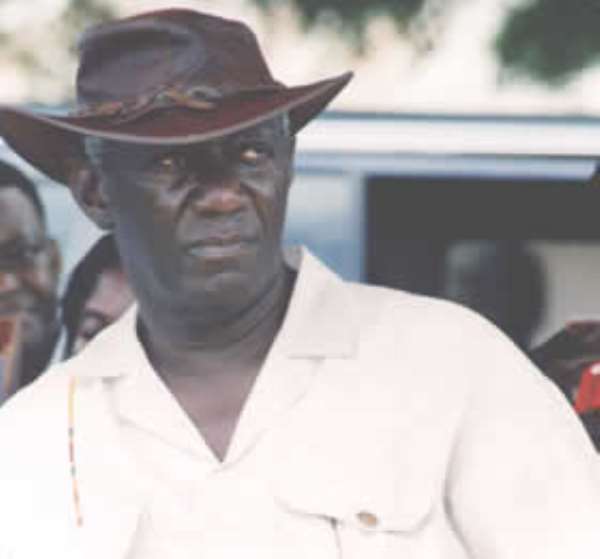 .... As pressure piles from within NPP ... Pushes his 'gutter-to-gutter' friends aside Will classmate Mpiani and nephew Anane be cleansed? IN A show of abhorrence for the use of his name to intimidate and bully workers, President John Agyekum Kufuor last Thursday decided to push aside the Energy Commission Board Chairman and the Executive Secretary, while investigations are conducted into the numerous allegations levelled against them. By Friday evening, letters effecting that directive had been signed by the Energy Minister, Professor Mike Oquaye and were on their way to the Chairman, Asante Mamponghene, Daasebre Osei Bonsu II, a.k.a. Saint Oswald Gyimah Kessie, the Executive Secretary, Mr. Kofi Asante and other Commission Members. THE NEW ACTORS The directive instructs also a member of the Board, Prof. A.K. Addae, to act as Chairman, with Dr. A. K. Ofosu-Ahenkorah, the soft-spoken engineer and Executive Director of the Energy Foundation, as the Acting Executive Secretary.
Dr. Ofosu-Ahenkorah, surprised at The Chronicle's call, when reached yesterday evening for his comments on the new task ahead of him, indicated it is only a caretaker role he would be playing, in order not to leave any vacuum until the appointment of a substantive Executive Secretary.
He pointed out, however, that though informed about the role, he was yet to receive a written letter to that effect, and would not want to comment further.
The Minister of Information, Mr. Dan Botwe, would not agree that the President's action is that of a new-look President, recanting on his mantra of those who made allegations in the media against government officials needing to supply evidence.
According to Mr. Botwe, the President's decision on the Energy Commission was not based on media reports, adding that it does not also suggest that the allegations against those affected are true yet. STAFF GOES FOR BROKE The workers of the Commission, after enduring what some of them termed acts of intimidation and threats from the Board Chairman and the Executive Secretary, whom they accuse of abusing their office without caring about the welfare of staff, decided to go public with their concerns.
The decision to go public came when at their meeting with the Executive Secretary and Chairman, on April 8, this year, the Chairman had decided to end the durbar with his last personal comment thus:
“Some of you have started that bogus habit and bad habit that pertained two or three years ago and resumed writing anonymous letters. I got to be frank with you, whether you like it or not Kufuor is … Some of us can even walk over to Mr. Kufuor, whether he is in the bathroom or not, and tell him that Auditor-General, I want such and such and such documents from you and by word or so I will get it from him.” That broke the camel's back, and the staff went for broke, spilling all the beans! DURBAR WITH MINISTER That act saw the new Minister of Energy, Professor Mike Oquaye, dash to engage the staff in a durbar on April 15, this year, where the staff did not hold back anything.
After their welfare chairman, Mr. Otu Danquah, had apologized for the leakage of their concerns to the media, they poured out their hearts.
The staff had told the minister that they had chosen their end-of-year gathering to voice out their concerns because there had been no previous opportunity.
It was at that gathering that the staff was asked by the Commission's chairman, “where were you, when we were playing gutter-to-gutter with Kufuor in Ashtown?”
The staff accused the Executive Secretary of acts of favouritism in placement and promotion of staff that was affecting the morale of workers, as well as the lack of prudence in resource allocation, while staff training and development programmes were made to go waste.
The workers had lamented the purchase and allocation of two new ¢650 million Toyota land cruisers for the Chairman's use, while technical staff lacked adequate means of transport to carry out their official assignments.
They had lamented also about their salary levels, which had not seen any movements since 2001, while government appropriation to the Commission for 2003 and 2004 that they had cited as disbursed, could have doubled their salaries!
Chronicle sources within the ruling New Patriotic Party (NPP) indicate there is a lot of relief among many party members, who feel helpless at the attitude of some of the President's old time friends, who often treated them with contempt, leaning on their long time association with him.
It is their hope that this action by the President would send a clear signal to the rest of their kind, so they do not continue to drag the President and the party's name into disrepute.
Attempts to get Professor Oquaye to confirm or deny the story proved futile.
Meanwhile, observers are wondering if the president would use the same sternness in dealing with his classmate Kwadwo Mpiani and nephew Anane in the face of the numerous allegations going against them.
The past week saw two outspoken personalities, Mr. Herbert Mensah, a businessman and former Chief Executive of Kumasi Asante Kotoko Football Club, and Kennedy Ohene Agyepong, the Member of Parliament for Offinso South, literally taking the presidency to the cleaners, in interviews on two different radio stations.
The two had intimated there are too many incidents that amount to massive corruption taking place and the lack of vision from the leadership.