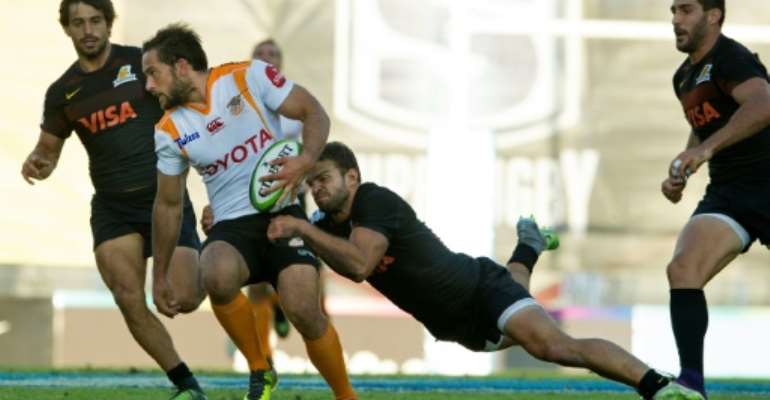 Wellington (AFP) - The table-topping Waikato Chiefs face a "pretty rigorous review" after struggling to beat the Melbourne Rebels who led a revival of the lesser lights in round four of Super Rugby.

The Chiefs have 19 points out of a maximum 20 from the first four rounds, but coach Dave Rennie was not impressed with the way they were saved by a late burst to beat the winless Rebels 27-14.

With six minutes remaining it was 14-14 before the Chiefs scored a penalty and two tries.

"We won ugly," Rennie said. "If you're not quite on your mettle you can get rolled and for a big chunk of the night, we were sub-par.

"We're happy with the way we finished but there'll be a pretty rigorous review when we get back from the bye."

Argentina's Jaguares, who only won four games last year, are already three from four this year after a thumping win over the Central Cheetahs put them top of the Africa 2 conference. 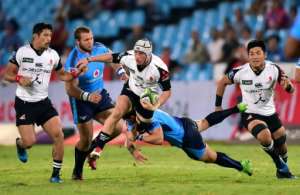 Piet van Zyl (R) of the Blue Bulls tackles Hayden Cripps of the Sunwolves during their Super Rugby match, at Loftus Versfeld Stadium in Pretoria, South Africa, on March 17, 2017

The Southern Kings and Sunwolves also showed they can be competitive even though they came up short against the Coastal Sharks and Northern Bulls.

The Crusaders produced another late escape to beat the Auckland Blues and remain unbeaten along with the Chiefs and the Western Stormers, who had a bye.

The Wellington Hurricanes, who returned to winning ways against the Otago Highlanders have lost one as have the Jaguares and Golden Lions and Sharks.

Crusaders coach Scott Robertson was in despair after his side rallied from a 19-point deficit to beat the Blues 33-24.

"We can't keep getting ourselves into that position," Robertson said after the Crusaders' third successful late charge in as many weeks. 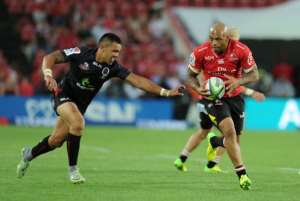 The Lions' Lionel Mapoe (R) fights for the ball with the Queensland Reds' Duncan Paia'aua during their Super Rugby match, at Ellis Park in Johannesburg, on March 18, 2017

The Bulls fared better with 14 men than 15 in their 34-21 win over Japan's Sunwolves, a much-improved side from that thrashed 83-17 by the Hurricanes on the opening weekend.

At half-time the Bulls were narrowly ahead 17-14 and only pulled away when down to seven forwards after flanker Reinaldo Bothma was red-carded for a high tackle.

Sunwolves captain Ed Quirk said his side may not be winning "but we are learning. The repeated hidings we suffered last season are, hopefully, a thing of the past."

The Sharks were staring at a shock loss to South African easybeats the Kings until teenager Curwin Bosch slotted a monster penalty from inside his own half with seven minutes remaining to seal a 19-17 win.

Kings fly-half Lionel Cronje still had a chance to pull off an upset win and deliver the Kings their first victory in 21 matches against a South African side, but his 80th-minute penalty attempt was off target.

Wallabies winger Henry Speight scored two second-half tries to lead the ACT Brumbies to a 28-12 win over the NSW Waratahs in Sydney to cement their place at the top of the Australia conference.

In Brisbane, Courtnall Skosan scored four tries for the Lions who cruised to a 44-14 victory over the Queensland Reds but even with the bonus point they could not overtake the Jaguares in the Africa 2 conference.

The Jaguares were always in command in their 41-14 win over the Cheetahs for their fourth consecutive win over a South African side on home soil.

The defending champion Highlanders recovered from their loss to the Chiefs last week by easily accounting for the Highlanders 41-15.

Take NPP’s money but don’t vote for them – Naana Jane to Asi...
44 minutes ago