The Re-Emergence of Sekondi 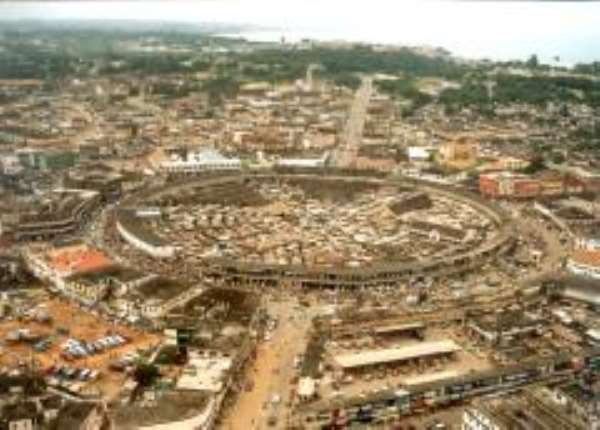 Sekondi is a city that has been synonymous with Takoradi over a long time especially, since the two cities became the twin capital of the Western Region. The histories of the two cities are also intertwined, revolving around the sea.

In an interview with The Chronicle, the Shama Ahanta East Metropolitan Assembly (SAEMA) Chief Executive (MCE), Philip Kwesi Nkrumah, said the first inhabitants of Sekondi, were Fantes from Kromantse, near Saltpond, in the Central Region, who came to fish at Adjua, near Takoradi.

According to the MCE, the new settlers found the waves of the sea at Adjua very rough, and the inhabitants unfriendly, so they decided to go back. When they reached Takoradi, the favourable surfs and the environment attracted them.

They therefore decided to settle at Amanfi and the area around the Ayire Estuary, as well as the present Takoradi harbour area.

Mr. Nkrumah said, it is believed that the original village of Takoradi was situated on a hill, but was later demolished for the expansion of the Takoradi Harbour.

In an interview with the Mayor in Sekondi, he explained that during the second half of the 17th century, slave trade increased rapidly with the expansion of plantations and economies on other continents.

During the period, Ashantis and Europeans traded for slaves from the northern parts of the country, for arms and ammunition. The MCE added however that this was more the case in the Elimina and Cape Coast areas and further east, than in the Sekondi and Takoradi areas. "Here, the trade in gold was rather more important," he disclosed.

The MCE said with the consent of the local chiefs, the Dutch established themselves around 1640 at Sekondi and at Butre in 1644, where they had previously had a lodge. The Dutch built Fort Orange, and after a period of mutual competition between them and the British in 1872, all Dutch possessions were sold to the British. Glorious days Mr. Nkrumah stated that the trade and investment into Sekondi and Takoradi attracted people to the area, resulting in a boost to its economic strength.

At the beginning of the 20th Century, a wharf was built at Sekondi to mark a significant industrial and commercial leap in the area.

"More foreigners were attracted into the area and it became known as European town."

The Minister of Interior and Member of Parliament (MP) for Sekondi, Papa Owusu Ankomah told this reporter last Thursday in Accra that Sekondi was the height of two major institutions of great economic importance to the then Gold Coast.

He said Sekondi was a business center, with the biggest railway station and beautiful surroundings. But over the years, particularly after independence in 1957, commercial activities shifted to Takoradi with the decline of the railway system and the new Takoradi port activities.

"Most of the activities relocated to Takoradi."

Today, Takoradi has a population of about 400,000 people, and an estimated floating population of 80,000, is made up of people from neighboring districts that commute the city daily for civic, trade and industrial activities.

According to the Sekondi MP, the Railways operation is the main commercial activity of the place and the major means of transport for raw materials in the country.

"Raw materials throughout the country, such as timber, gold, and bauxite were all transported by rail."

He said Sekondi was the headquarters of The Ghana Railways Corporation because of its importance.

Hon. Owusu Ankomah noted that since Ghana Railways was the main employer at Sekondi, many people came from the Central Region into Sekondi for employment.

Asked why Sekondi, with all its economic and commercial background has lost its glory, Mr. Nkrumah, the MCE, said this was due to the main shopping centers which used to be at the European town, moving to Takoradi, thereby necessitating the construction of new houses for them, and an urbanization plan put in place.'

According to him, it was at this same time that most people moved to settle at the most attractive residential areas adjacent to the coast, and at the Takoradi harbour area.

"The importance of Takoradi worked against Sekondi, and commercial activities at Sekondi ceased," the Mayor said.

According to him, redirecting of the railroad, which connected Sekondi and the gold mines at Tarkwa, Obuasi, and Kumasi to Takoradi, marked the accelerated decline of Sekondi.

"Incidentally, the headquarters of GRC was taken to Takoradi," he submitted.

The construction of a new and modern harbour for Takoradi, in 1927,after the site had been chosen for that project in 1920, led to Sekondi losing some more of its shine.

The Aliens Compliance Order of 1969 did not help the city either. The Indians, Lebanese and Syrian traders had to leave Sekondi. Only fishermen were attracted there, because of the surfs.

He said the commercial and economic importance of Takoradi resulted in a decision by the authorities to include it in the Town Council in 1956, linking the two places up as a twin city.

He added that, the seat of authority however remained in Sekondi, and its Town Council became a City Council in 1962. The harbour monopoly of Takoradi was broken in 1962, with the construction of the much bigger and deeper port of Tema.

This, he said, has affected the economic activities of Sekondi, which is today known as the Shama Ahanta East Metropolitan Assembly (SAEMA).

Mr. Kwesi Atta, a citizen of Sekondi said, the unemployment rate in the area is very high and the government should come to their aid by creating more jobs for them. He was however grateful for what the ruling government has done so far and called on them to do more for the constituency.

The MP said the start of the construction of a stadium, the biggest in Ghana, would employ many people in the metropolis.

He revealed further that, plans to establish a private university in Sekondi would also boost the image of the town to regain its lost glory.

In the long term, the MP encouraged the establishment of Information Technology (IT) industries in Sekondi.

"Rehabilitation of old houses at European town, which used to be the commercial center of the town, and demarcation of places of interest as a Tourist Centre, would be embarked upon seriously," the MP said.

On his part, the MCE stated that the assembly has identified projects as its priority areas for redevelopment, and investment activities under its second five-year medium term development plan.

According to him, the abandoned Sekondi railway station is proposed for a permanent trade fair site of warehouses, museum, pavilions, parking lot and a fence work.

He explained that the abandoned playing field at Esikadu, Sekondi is earmarked for a Youth Recreation Center, to cater for badminton, tennis courts, computer room, and a football field with stands rehabilitated for spectators.

He cited also a plot of land, which is available at Sofokrom, Sekondi Export Processing Zone (EPZ) for an industrial estate.

Mr. Nkrumah asserted that the bank of the Essei Lagoon, Bakano and Sekondi were proposed for leisure complexes.

Modernization of the Sekondi market, which currently comprises ground floor stores, would be expanded into a storey building.

To solve this problem, Mr. Nkrumah said a consultant had been engaged by the assembly to build up a better database and hoped this would be done very soon.

On waste management in the twin-city, he said the ¢10 billion World Bank land fill project, the Urban Environmental Sanitation Project (UESP) at Sofo-Krom, is complete. He said the project would generate organic fertilizer through decomposition of refuse for farmers in the region.