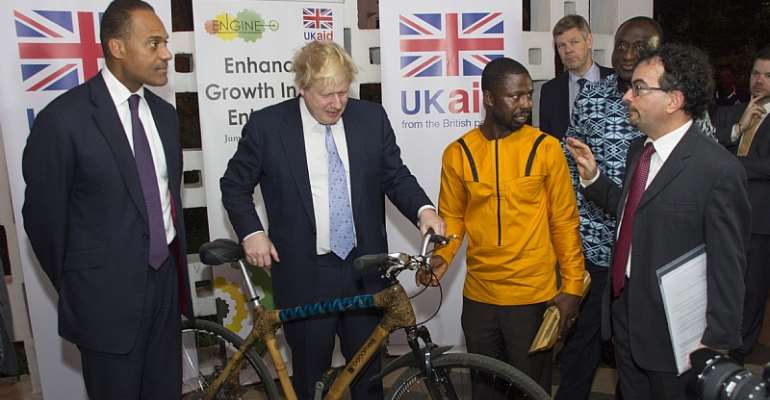 On his recent visit to Ghana to deepen bilateral relations between Ghana and the United Kingdom, Foreign Secretary Boris Johnson took a ride on one of the bamboo bikes produced by the internationally recognized Ghanaian manufacturing company Booomers International Ltd. This happened during an interaction section with a few small and medium enterprises in Ghana supported by the UKAID. As a great biker himself, he became fascinated with the make and the design of the bikes and decided to take a ride on the bike which he later described as very light and comfortable.

Mr. Boris Johnson was very optimistic a product like that of Booomers will do very well on the UK market and therefore encouraged the Chief Executive Officer of Boomers International, Mr. Kwabena Danso to tap into the opportunities that exist in the UK to expand the company’s market base. Among the dignitaries who were with Mr. Boris included the UK Trade Envoy to Africa, Mr. Adam Afiriyie and the British High Commissioner to Ghana, Mr. Jon Benjamin who is has been a great admirer and supporter of the company. The Ghanaian Minister for Trade and Industry, Mr. Alan Kyerematen was very enthused about the bikes and the fact that they were made from Bamboo in Ghana.

On his part, the CEO of Booomers International mentioned that the UK market is the company’s prime focus this year and that they are seeking to build partnership with potential distributors across the UK. “We are very passionate about using whatever opportunities are available in solving problems in rural Ghana since that is the genesis of a lot of the country’s problems. Due to lack of economic opportunities, a huge number of the young people in rural communities migrate to the urban areas in search of livelihood and it is against this background that the company is using the opportunity to train and employ youth in rural areas. We are looking at creating the Bamboo village which will become a catalyst for job creation and also create the value chain for bamboo just as China has done”,he said.

Booomers International is introducing three new products in addition to their current bike frames. These are the tricycle and balance bikes for children and the bamboo speakers. These products will be on the market at the beginning of March, 2017.

Booomers International is a social enterprise which was established in 2014 as the commercial arm of the Yonso Project to undertake the commercial production of bamboo bicycles and accessories. Currently, the company has gone beyond just bikes and is developing new products from bamboo. The company’s products are in high demand in Germany, Netherlands, Australia, Canada, USA and will this year go into the UK market. The story of Booomers is one unique story that shows how determination and discipline make a local company become a force to reckon with on the international market.