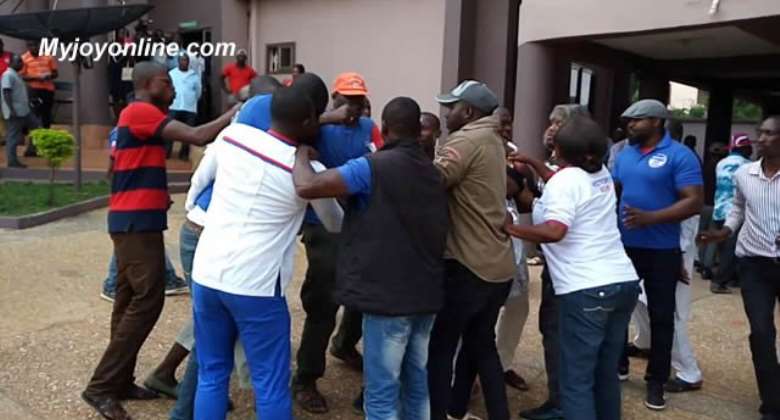 There was a hold-up during the swearing in of government appointees at the Tema Metropolitan Assembly (TMA) on Monday after the credibility of some of the candidates was questioned.

A similar incident in Accra, also on Monday, characterised the swearing-in of some government appointees to the Accra Metropolitan Assembly (AMA).

supporters of the New Patriotic Party (NPP) from the Odododiodio and Ablekuma South Constituencies stormed the premises of the AMA while the swearing-in was ongoing and disrupted ceremony of the government appointees.

The Tema East Constituency executives of the NPP vehemently opposed the appointment of one Mr Osman Ashitey among the 15 persons to be sworn in to take up various positions at the TMA.

Mr Teye indicated that Mr Ashitey’s loyalty to the party was questionable, accusing the government appointee of announcing his intentions to leave the party to join the National Democratic Congress (NDC) after the party’s primaries.

He added that the competence of such a person was questionable as he refused to contribute to the party’s recent electoral victory.

He also claimed Mr Ishmael Ashitey of by-passing the constituency executives and to appoint his relative who does not merit an appointment.

The constituency chairman called on President Nana Akufo Akufo-Addo to ensure that party structures were allowed to work so that deserving people were appointed.

Contrary to this, he averred, the party could lose the next general election.

Meanwhile, the nationality of another appointee, Mr Anthony Fenandez, was challenged until he produced his passport and national ID to prove he was a Ghanaian.

Justice Joseph M.C. Ali Junior, a Tema District Magistrate, led the appointees to take allegiance, office and secrecy oaths after it was agreed that Mr Ashitey and Mr Fenandez should be part of the government appointees.

The occasion was also used for the creation and adoption of two sub-committees; gender and sport and trades and industry.

Mr Richard Fiadomor, TMA Presiding Member, advised the government appointees to be committed to the work of the Assembly and help it achieve its aims and restore its glory of being the number one Assembly in Ghana.