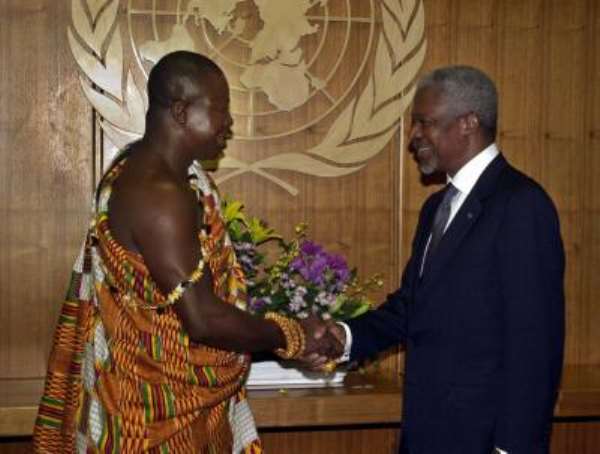 Corridors of Power: Annan's future not rosy Washington, DC, Apr. 1 (UPI) -- U.N. Secretary-General Kofi Annan may have been let off the hook in the second interim oil-for-food independent report by former U.S. Federal Reserve Board Chairman Paul Volker, but he still faces the displeasure of his tribal chiefs back home, knowledgeable U.N. sources said Monday.

Even after a lifetime spent outside Ghana, Annan's tribal and family ties have never stopped playing a dominant role.

"What he really wants to do is to return to Africa, to his native Ghana," said one of these sources who is close to the family.

At 67, Annan is not prepared to go into retirement when his U.N. term ends in December 2006, yet while the Volker report implicates Annan's son, Kojo, but exonerates the secretary-general himself from direct involvement in the huge financial scandal, the odor of corruption and the signs of bad management at the world body -- of which the oil-for-food scandal is but one symptom -- have done nothing for either Annan's resume or his reputation.

There had earlier been talk in political circles in Accra that Annan might run for president of Ghana. That would position him to inherit the mantle of Nelson Mandela as one of Africa's key leaders. But the scandal has earned the disapproval of the senior chiefs of his tribe, the powerful Ashantis, and in particular the king of the Ashantis, King Otumfuo Osei Tutu II. The Annans -- father and son -- have embarrassed family, tribe and Ghana. As a result Kofi Annan's hopes of high political office in his own country appear slim.

When King Otumfuo instructed Annan's 22-year-old son to return home to Accra as the oil-for-food scandal began to unfold, Kojo obeyed at once. One source said the tone of the king's private messages to the secretary-general over the affair can only be imagined.

Annan's other possible post-U.N. job, sources said, was the London-based position of secretary-general of the British Commonwealth, the post-imperial organization of 53 former colonies, many of them in Africa.

This would enable Annan to remain a politically relevant voice for African concerns; and what's more a British knighthood has customarily gone with the job. But the sources said that in the wake of the oil-for-food debacle it would now be harder to create the consensus of member support he would need to clinch the appointment.

As one commentator said recently, it's Annan's ill luck the Africans aren't more like the Austrians. The Austrians' response to revelations in 1986 that U.N. Secretary-General Kurt Waldheim had been an officer in the German army in Yugoslavia where it had committed atrocities was to elect him their president -- an act of defiance that resulted in Austria's international isolation throughout Waldheim's six-year term.

By contrast, the reaction of African member states to Annan's closeness to (if not involvement in) the current scandal is more embarrassment than defiance, and observers believe that in most African countries Annan, would have little backing if he ran for the office of dog catcher.

An unusually tense secretary-general snapped "Hell no!" he won't go when asked if he would contemplate resigning over the scandal. He is said to be determined to ride out the storm; and if he stays put there is no provision in the U.N. Charter for forcing him to leave. The Security Council can only express its displeasure -- if it can even agree on that. The U.N. General Assembly is unlikely to vote for his resignation: the African delegates will concede him that much.

In the Volker interim report, Annan does not get off totally scot-free; and still to come is the full report in the summer. Volker says U.N. oversight of the program was lax, and for that the buck stops on the secretary-general's desk. But the fault can be spread evenly like a low-fat butter substitute on a piece of whole-wheat toast to include, for example, the U.N. Security Council.

The oil-for-food program was initiated by the Security Council and the requisite green light to disburse the money collected from Iraqi oil sales but not handed over to the Saddam Hussein regime came from the council's 666 Committee headed by the United States and Britain.

Privately, Annan has confided he was operationally more involved in the program's political dimensions, and knew earlier about the diversion of funds than he had previously let on. But permanent members of the U.N. Security Council, on repeated occasions, blocked corrective measures in the interest of what were deemed "greater political purposes."

The fact Annan never went public with this my-hands-were-tied scenario does little to help his own case. But it's probably helpful the Bush White House has publicly stayed aloof of the scandal, and is apparently at variance with Republicans who are hammering Annan and calling for his departure.

Strange that. Given Annan's open opposition to the Bush administration over the Iraq war, and his memorably scathing denunciation of the war as illegal in his speech to the General Assembly last September, you'd have thought this would be payback time for the White House.