We Can Do It– Says Nana 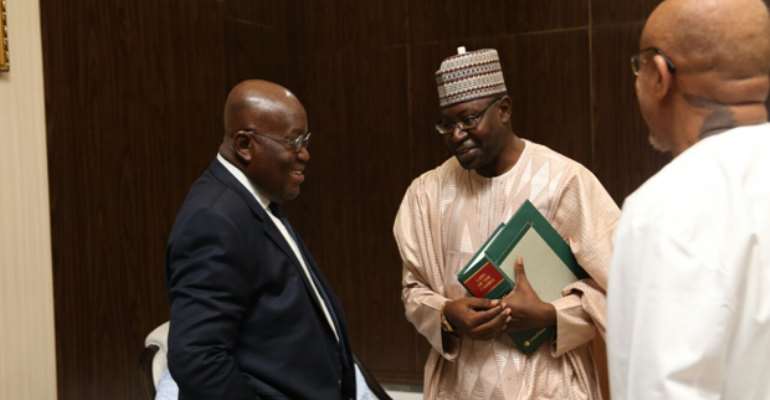 President Nana Addo Dankwa Akufo-Addo has appealed to Ghanaians living in and out of the country to rally behind his administration as he seeks to return the country onto the path of progress and prosperity.

Addressing a gathering of Ghanaians resident in Bamako, Mali, on Friday, January 13, 2017 – after his arrival in that country for the Africa-France Summit – President Akufo-Addo expressed confident in his government's ability to transform the fortunes of the country (Ghana) and give the citizens a dignified living.

Reiterating his belief that the wishes and aspirations of Ghanaians can be met during his time in office, President Akufo-Addo noted, “What we need to understand and believe is that we can also make it in Ghana, and improve the standards of living of our people. We can do it.”

He therefore, urged Ghanaians in Mali, and those living in other parts of the world, to “start considering and planning your return home, so you can also contribute your quota in helping move our country forward. Ghana needs your strength and intellect.”

On the outcome of the December 7 elections, President Akufo-Addo noted that Ghana's standing in the league of democratic nations has soared greatly, largely as a result of the peaceful outcome of the polls.

“Our elections were conducted without any turmoil. The Ghanaian people exercised their democratic franchise peacefully. The then sitting President John Mahama also conducted himself very well by accepting the verdict of the elections. Ghana is at peace, and I am confident that very soon there will be a lot of more positive news on the economic and developmental fronts for all of us,” he added.

Communique
The president together with heads of state and governments from about 30 African countries has committed themselves to ensuring economic growth in their respective countries.

They want to supervise a more “inclusive economy” that will help to create jobs for the youth on the continent.

In a communiqué issued on Saturday, January 14, 2017, at the end of the 27th Africa-France Summit, the leaders agreed to a framework of the International Sustainable Development Agenda which include the Addis Ababa Action Agenda on Financing for Development, the United Nations Sustainable Development Goals, the Paris Agreement on Climate Change and the African Union's Agenda 2063.

With French President, François Hollande in attendance, development assistance amounting to 20 billion euros to participating countries by 2018, was pledged by the French government.

To this end, the heads of state and governments indicated that education and vocational training would be prioritized, adding that it would improve “human development and the integration of young Africans in the labour market.”

They agreed to strengthen the management of education systems on the continent by focusing on quality, particularly by putting in place efficient training and assessment policies, as well as promoting top-quality vocational training.

Regional Security
On security in West Africa, the leaders resolved to develop joint border patrols in the fight against terrorism with a focus on the dreaded Boko Haram Islamic extremists, with France pledging to continue supporting the operationalization of the Africa Standby Force.

In order to provide African peacekeeping operations with sustainable and predictable sources of funding, the heads of state welcomed the AU's decision to find a sustainable financing mechanism for the Peace Fund. They also welcomed the EU's contribution to the financing of these operations and reiterated the need to diversify international support.

The communiqué also called for an urgent reform in the United Nations and in its Security Council, through the enlargement of its membership in both categories, with a greater African presence – especially amongst its permanent members – so as to make the Council more representative of today's world.

The leaders stressed the key role of the African peace and security architecture in preventing, managing and settling conflicts, and, thus, called for more support.