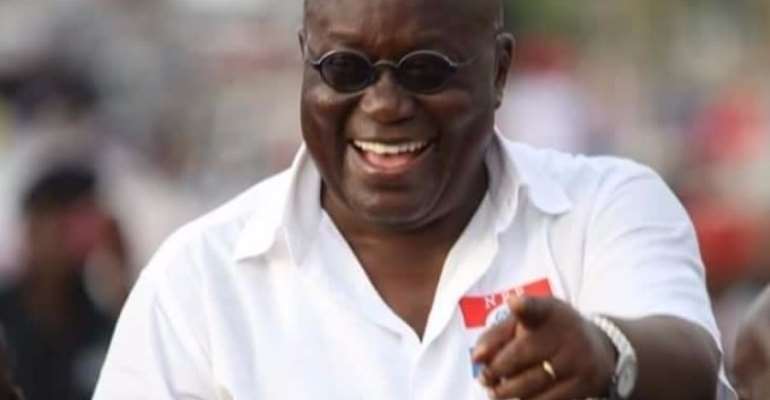 You may call it all the unpleasant names and ridicule it with the most comical words in the world, but the fact still remains that some decisions are politically reasonable than what the realist thinks.

Any right thinking person in the opposition National Democratic Congress must be extremely worried about President Akufo Addo's creation of the Ministry of Inner City and Zongo Development. The NDC should not only be scratching their heads and gritting their teeth because this ministry will burden the tax payer with excess expenses, members of the party must also be worried about the political effect of that ministry.

President Akufo Addo and his team of advisors created this Ministry for a political purpose. It is one of the ways the president wants to wash off the Akan tag on his party, NPP. Over the years, the NPP, rightly so, has been tagged as an Akan party.

Conducts and utterances of leading members of the party, including President Akufo Addo himself, have confirmed this Akanization of the NPP. The NPP has paid political price for this tag and from all indications the party has now located its lost bearing to erase the Akan tag.

Many have argued that the Akanization of the NPP is a perception forced on the party by NDC propagandists. This assertion is not entirely correct. If for nothing at all, Nii Ayikoi Otoo, former Attorney General and NPP kingpin, a Ga, has confirmed that non-Akans feel like outcast in NPP.

That was the sordid state of the NPP so far as representations of minority tribes are concerned. But this thing, I dare say, may not be said of the NPP again if their strategy to de-Akanize the party works to perception under President Akufo Addo.

Regardless of how the late Alhaji Aliu Mahama was treated, the NPP has produced two Muslims vice president. The NDC is yet to produce one. But without a Muslim vice president, the NDC prides itself as the party to have given Muslims two holidays, well-structured hajj organization, adequate representations both in government and party leadership positions and so on.

The NDC has always used these gains to woo those living in the Zongos to their side. The NDC is quick to point to the Aliens Compliance Order by Dr Busia, and how Muslims were humiliated because of that order. President Akufo Addo, in particular, has suffered because of the behavior of NPP forebears and his own sometimes reckless pronouncements.

With the creation of the Inner City and Zongo Development Ministry, the NPP is aiming at one thing- to consolidate it gains in the Zongos and densely populated areas. These are the areas that have voter for the NDC en bloc. If they succeed in this pursuit, then the NDC will be doomed forever.

Results from the last election indicate that the NDC is gradually loosing grip on the zongos and densely populated areas. Results from Ayawaso North, East, Central, Ablekuma Central, Asawase and others are enough pointers to back this unscientific theory. Many people in these constituencies either refused to vote or voted for the NPP because their principal need; employment was not met under the NDC government.

The Inner City and Zongo Development Ministry is not novel. There was something like that under the Mahama government but fashioned in a different form. There was a Presidential staffer under Mahama who was in charge of the welfare of Muslims. Whatever that position was used to achieve is something the NDC must deal with.

Going forward, anytime the NDC touts its achievement in the Zongos, the NPP will point to the "Zongo Ministry" as a way of recognizing Muslims. And if the sector minister, Ahaji Boniface Abubakar Saddiq, is able to implement the Zongo Development Fund and other Zongo related promises, the NDC will be in trouble.

Those living in the Zongos are enthused about the creation of this Ministry. Attempts to ridicule it will create disaffection for the NDC amongst those living in the Zongos. What the party needs to do is to find ways to renew its marriage with its base. Hoping for President Akufo-Addo to fail in order to take advantage to recapture power may not work. Even if President Akufo-Addo does not redeem some of his Zongo-related promises, the creation of this ministry alone sits well with most “Zonglians”. As the case stands now, the NDC, in the words of Kofi Wayo, is living in a "hopeless hope". But it shall be well.