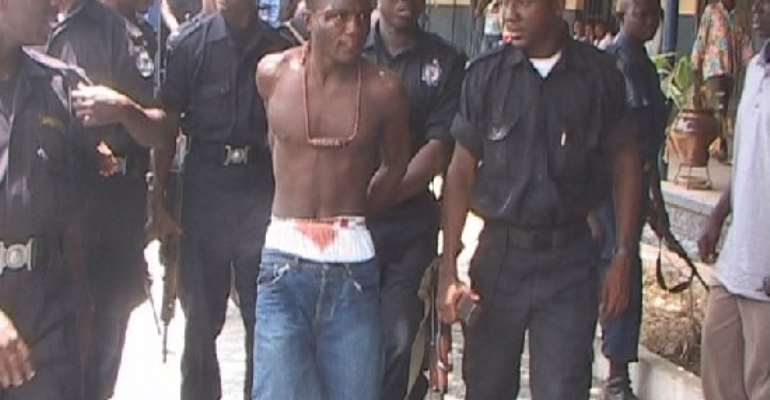 ARYEE Ayeetey, alias Ataa Ayi, the alleged armed robber, has confessed to interrogators that he was behind the August 8, 2004 attack on the guests of the former President, Flt Lt J. J. Rawlings.

Ataa Ayi, now on remand at the CID Headquarters in Accra, told police investigators that he undertook the robbery with three of his accomplices, Ga Mantse, Nii Armah and Prince Arthur.

Police sources said Ataa Ayi told investigators, that he and his gang spotted the Land Cruiser around the Ridge area and trailed it to the Nyaniba Estates.

Ataa Ayi, according to the police sources, said they trailed the group till the three men got down and entered a bar at the estates.

He said he then sent Nii Armah to go and survey the vehicle and its contents.

Ataa Ayi reportedly told the police that the other members of the gang were still waiting in a taxi at a safe distance.

Not long after Nii Armah had returned, the remand prisoner told the police, the driver of the Land Cruiser got out of the vehicle holding a bag and attempted to open the boot.

“We moved in at that stage and ordered him to surrender the keys or be shot,” he reportedly told the police.

Ataa Ayi told the police that the driver initially resisted so he fired a warning shot from his G.3 rifle and that alerted the driver to how serious the robbers were and he surrendered the keys to them.

He said they then emptied the vehicle of its contents. These, according to Ataa Ayi's confession to the police, included three travelling bags, unspecified amounts in naira and cedis, documents and a pistol.

He reportedly told the police that they fired shots to scare away people who had been attracted to the scene and escaped.

As to what they did with the documents, he said all they needed was the money and the pistol so they threw the other items onto a refuse damp.

“That is how we dispose of these things; we locate a refuse dump and throw them there because I don't want to wear somebody's attire to attract attention,” he is reported to have told the police.

The Accra Regional Police Commander, Mr Kofi Boakye, said the three guests of the former President had returned from Wa, where they had gone to confer with the then flag bearer of the NDC, Professor Evans Atta Mills.

They had then decided to go to Chesters Palace, a guest house, to relax when they were attacked by the gang.

PPP calls for constitutional amendment before election 2024
3 minutes ago