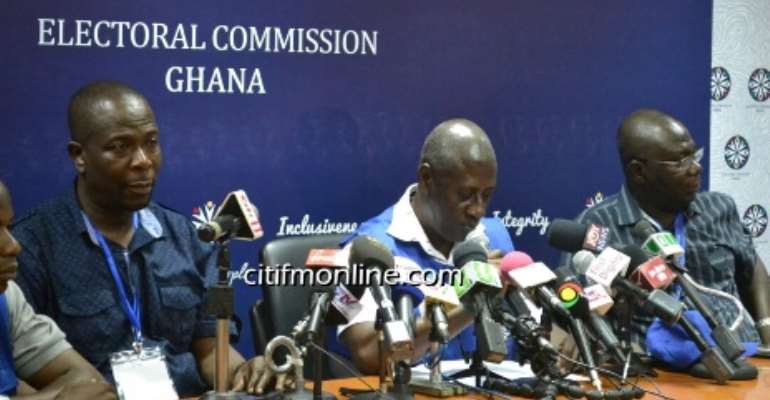 The Electoral Commission has called on the various political parties in the country to desist from declaring results from the general elections saying the EC is the appropriate body mandated by law to do that.

“We don't want any political party to be ahead of the electoral commission to declare results. We are therefore asking political parties to desist from that,” Director of Electoral services at the EC, Samuel Tettey said at a press conference at dawn on Thursday.

This comes on the back of a press conference held by the opposition New Patriotic Party who announced a win for their presidential candidate Nana Akufo-Addo.

The NPP at a press conference called on President John Mahama to concede defeat because according to them, about results from 80 percent of the over 28,000  polling stations they have gathered so far show that Akufo-Addo is leading with 54.91%.

Campaign Coordinator of the NPP, Peter Mac Manu who address the press said Akufo-Addo had 4,676,998 while President Mahama had 3,644,724 votes.

“This is the time that we call on our opponent [President Mahama] to concede,” Peter MacManu demanded.

But Mr. Tettey called for calm and urged Ghanaians to wait for certified results from the EC.

“Our attention has been drawn to the press conference by the New Patriotic Party. We wish to state that currently the commission has not received any certified collated results from the various constituencies nationwide. By law it is the chairperson of the electoral commission who can declare certified results of the 2016 general elections. The commission urges Ghanaians to remain calm as it gets the certified collation results at the national collation centre which has been set up at the headquarters of the commission,” he added.