Education is the key to Ghana's dev't - Kufuor 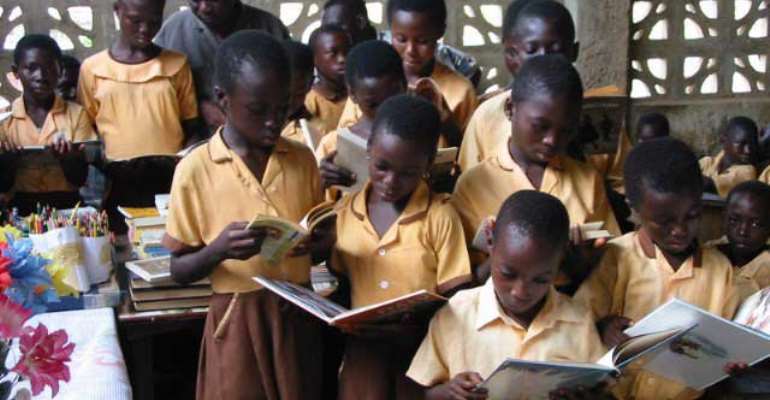 Accra, March 5, GNA - President John Agyekum Kufuor on Saturday said that since education holds the key to the pace of Ghana's development, his Government has placed a high premium on it to ensure that the nation moves forward in a sustained manner to enable it to compete in the global village.

"The experience of other nations has shown that the type of education that is offered makes a great difference to the returns that a country gets," he added.

President Kufuor made the observation when he presented the President's Independence Day Award to 20 students in Accra. They were a male and female student from each of the 10 Regions who excelled in the 2004 Basic Education Certificate Examination (BECE). The award package included a certificate jointly signed by the President and Minister of Education and Sports and a three-year scholarship award valued at up to seven million cedis for each award winner to cover boarding and lodging tenable in any Senior Secondary School (SSS).

Additionally, each award winner would receive one million cedis in cash, 200,000 cedis for books and a special book prize.

The criteria for the selection, in addition to their academic performance, were community service, exemplary conduct and good moral behaviour.

The award ceremony forms part of the activities to mark the 48th Anniversary of Ghana's Independence being celebrated under the theme: "Sustaining Democracy In Ghana- The Bedrock For Peace And National Unity".

President Kufuor said the Government's White Paper on the Education Reforms targeted objectives, which when combined should lead to the human resource development that was required to accelerate the country's socio-economic development.

He said vocational and technical training were now taking their rightful places by the regular academic courses as they provided the necessary diversification of career choices that would serve the society.

President Kufuor said the implementation of the new reforms would enable all Ghanaian children to have early preparation in kindergarten. This would ensure a more equitable distribution of opportunities for all children in order that the accident of any individual's birth whether in fortune or otherwise did not condemn him or her to marginalisation within the community.

President Kufuor said, central to the reforms were the training and welfare of the teacher without whom quality and purpose-driven education could hardly be achieved.

He said the Government was, in addition, vigorously pursuing the provision and upgrading of infrastructure for education at all levels, taking into account the necessary expansion to accommodate the increasing number of students.

President Kufuor advised the award winners to maintain the high standards they had achieved.

"Please keep in mind all those who have made your achievement possible, parents and guardians, teachers, classmates, well-wishers who supported you in school and the society."

Mr Yaw Osafo-Maafo, Minister of Education and Sports, said the Ministry had instituted a Best School Award for each district from this academic year to motivate the schools to perform better. He said three of the award winners would be selected to attend "Camp Rising Sun" in the United States and Denmark.

School children read an Independence message to the Government in four Ghanaian languages, Akan, Dagbani, Ewe, Ga and English, which they presented to the President Kufuor.

The message expressed optimism that Ghana would become one of the outstanding democratic countries in sub-Saharan Africa.

The children said they were, however, frightened by a certain phenomenon that was gradually destroying the country's social fabric. They said ethnicity was threatening to cast asunder the bonds that had identified and singled out Ghanaians as a hospitable and peace-loving people.

The children said there could be no better cure for this canker than respect for one another, irrespective of gender, ethnicity, creed or political affiliation.

"We would like our parents to think of themselves first as Ghanaians with a common destiny."

The children promised to be law-abiding and contribute in their own way towards national development because sustaining and nurturing democracy was the only way to bequeath peace, tranquillity, freedom, liberty and progress to posterity.