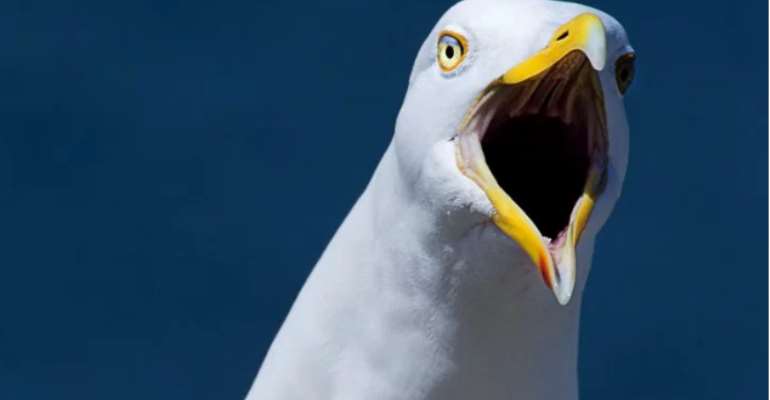 An 80-year-old woman said she felt like a prisoner in her own home after she was attacked repeatedly by a flock of seagulls.

Barbara Cox was targeted by the birds while putting her washing out with one gripping her leg and another gouging at it.

Police said they couldn’t help and after three days she finally made a dash for it to go to A&E to get the leg treated.

She said: ‘I went out to hang my washing out and I thought “what’s that at the bottom of the garden?” and saw it was a dead chick.

‘The next thing I knew two seagulls swooped down on me and one attached itself to my leg. I was terrified – I’m 80 years old.

‘It came down and grabbed me on the leg with its claws. It pecked me and caused me to bleed.

‘I phoned the police up and said “I’ve been attacked” and they said “by who?”

‘I said “no, by a seagull” and “can you send somebody to pick up this bird” and they said “oh no we haven’t got the funding for that”.

‘I said “can’t you use my percentage of the taxes I pay for that?”.’

She added: ‘It seemed like they were attacking forever but it must have been a minute or so.

‘I fell back trying to fight them off, then managed to get up crying and saw the blood on my leg and went inside to get it washed and sterilised.

‘It was horrible. I was too scared to go outside of my house for three days but I had to go to A&E in the end because my leg was hurting.

‘It could have had my eye out.’
She believes they may have been protecting the dead chick.

But Brighton and Hove City Council said it would not be releasing additional information on gulls.

Councillor Gill Mitchell said: ‘We receive many enquiries about seagulls and have advice on our website.

‘Our pest control team can give advice and a free quote on how to pest proof properties to stop gulls from nesting.’

Sussex Police said seagulls were not a police matter.

Radio Gold, XYZ, others yet to receive re-authorization lett...
54 minutes ago