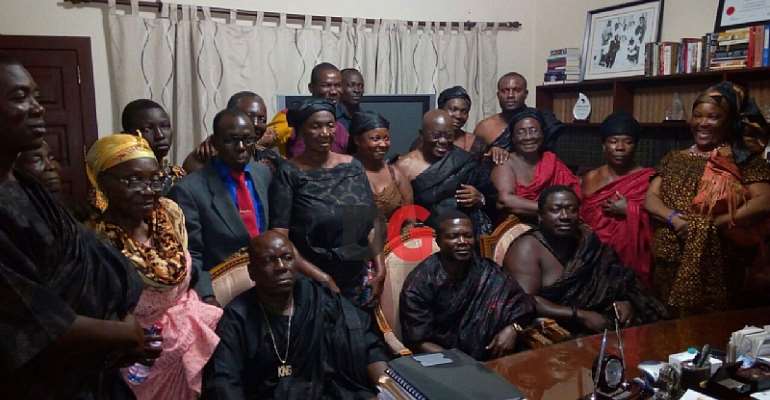 Nana Akufo Addo poses for a historical picture with his guests from Bator, Volta Region.

It has emerged that some members of Nana Akufo Addo's patrilineal family live in Bator, Volta Region having lived there as descendants of the original migrants from Akropong, Akwapim in the Eastern Region.

Elders of the Obuobisa family, part of the Bator landscape yesterday called on the flag bearer of the New Patriotic Party (NPP) to introduce themselves to him, a historical moment which the visitors and their host cherished greatly.

Although he had a tight schedule preparing to travel to Akropong for a funeral, Nana Akufo-Addo found time for his missing family members who were so excited to meet him.

Although bearing Akan names, their language of communications among themselves is Ewe. During an NPP meeting some four or so years ago in Akwapim, one of the participants mentioned his name as Obuobisa the family name immediately prompting a question from somebody. After putting the pieces together, the jigsaw puzzle was created and Nana Akufo Addo's family name popped up culminating in yesterday's visit.

The Krontihene of Bator Togbe Doto II, a member of the family was part of the delegation and who in his interaction with the media said they were on their way to Akwapim to visit the family house from where their ancestors migrated to their Bator home.

Nana Akufo Addo, beaming with smiles as he hosted his guests posed questions of historical relevance and in the end told his guests “this is your home feel free to come here. You are always welcome.”

He assured his relatives that during his next visit to the Volta Region as part of the second leg in his campaign tour of the place, he would call on the family in Bator.