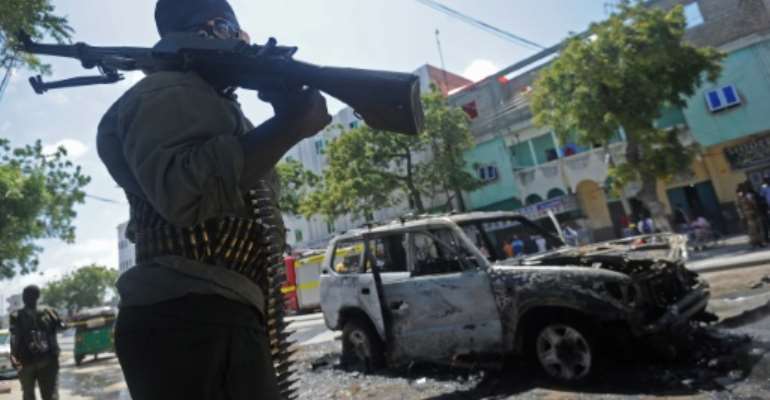 Somali soldiers guard the burnt-out wreckage of a car that was targetted in a bomb attack in Mogadishu, on September 5, 2016. By Mohamed Abdiwahab (AFP/File)

Mogadishu (AFP) - A senior Somali military commander and four of his security guards were killed when a suicide bomber rammed a car loaded with explosives into a military vehicle, officials and witnesses said.

'There was a heavy blast caused by a car loaded with explosives alongside the industrial road, several members of the military were killed in the incident including a senior commander," said security official Abdiaziz Mohamed.

Witnesses said a vehicle with a senior military official on board was travelling on the road when another vehicle rammed it, causing a massive blast.

'The blast was very huge, I saw smoke and fire overshadowing the whole area," said witness Abdi Hassan, adding "we have been told that General Gobale was killed in the suicide attack',

The attack was claimed by the Al-Qaeda aligned Shabaab jihadist group in a statement released by its Andalus radio.