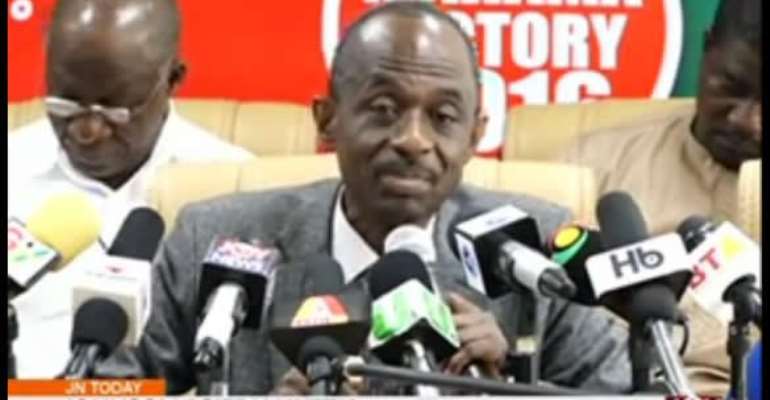 The General Secretary of the governing National Democratic Congress said anybody who accuses NDC of stealing its visions and ideas can only be a neophyte in politics.

Johnson Asiedu Nketia said the policies promised by the governing party in its manifesto are promises based on the party's social democratic ideologies and cannot therefore be deemed to be stolen ideas.

Addressing a charged crowd of NDC supporters in Sunyani, where the party is launching its 2016 election manifesto, the erudite General Secretary said the party that believes in the welfare system of nation building cannot be said to be copying a party with capitalist ideology.

He was responding to the opposition New Patriotic Party which has on several occasions accused NDC of stealing its manifesto promises.

Touching on one of those promises, Johnson Asiedu Nketia said it can only be a case poor lenses, or a case of a bad dream for the NPP leader Akufo-Addo to claim to be the one with the vision to establish the Cashew Development Fund.

He said under the leadership of president John Rawlings with Dr Kwabena Donkor leading the Agric Ministry giant strides were made in the growth of cashew in Ghana.

More importantly, he said it was Dr Nkrumah who began the commodity development board with emphasis on the growth of Cocoa and other cash crops.

He found it rather laughable that several years down the line, the NPP under Nana Akufo-Addo, will now claim to be the ones who birthed the cashew development board.

Johnson Asiedu said the NDC campaign is fully oil and poised for victory and urged the party faithful to support the agenda.

He said for a party which cries over a stolen manifesto promise cannot be trusted to jealously guard the state resources insisting that the time to kill the elephant is now.