Research Review of Hibiscus Sabdariffa(Sobolo): Could it be the Next ‘Magic bullet’ Preventive or Curative Medicine In Ghana? 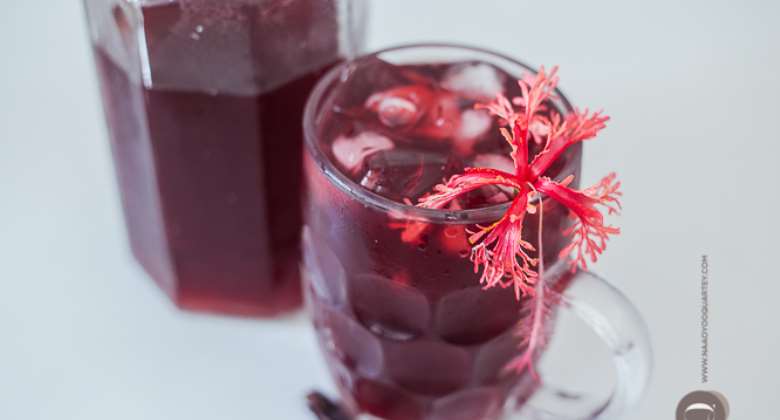 With about 200 species and more than 5,000 hybrids associated with the genus, hibiscus can be had in a rainbow of colors. Ghana stands a chance of becoming the next medical World Bank in alternative medicine if we pay special attention to alternative medicine. Tea (Camellia sinensis) contains numerous chemicals beneficial to human health.

The likes of India, China and other countries that have transformed their alternative medical system are worth emulating. Today, we import different types of teas from these countries whilst we can also transform ours and also export our teas to the world.

Brief Overview
There are two main varieties of Hs, the first being Hs var. altissima Wester, cultivated for its jute-like fibre and the second is Hs var. sabdariffa. The second variety includes shorter bushy forms, which have been described as races: bhagalpuriensi, intermedius, albus and ruber. The first variety has green, red-streaked, inedible calyces, while the second and third race have yellow-green edible calyces (var. ruber) and also yield fibre ( Morton, 1987 ).

The juice is similar to cranberry juice, but not as bitter. The calyces are harvested while they are still tender and juicy, about 10 days after the flowers appear. The plants will continue to flower and produce if kept picked. If grown just for juice production, is cultivated much like tomatoes, peppers or eggplants.

The seeds are eaten roasted or ground in meals, while the leaves and shoots are eaten raw or cooked, or as a sour-flavoured vegetable or condiment (Wilson & Menzel, 1964). In Sudan, the leaves are eaten green or dried, cooked with onions and groundnuts, while in Malaysia the cooked leaves are eaten as vegetables (Ismail, Ikram, & Nazri, 2008). In Africa, the seeds are roasted or ground into powder and used in meals, suh as oily soups and sauces. In China and West Africa, the seeds are also used for their oil (Atta & Imaizumi, 2002). Another use for the seed is as a substitute for coffee (Morton, 1987).

It's known as bissap in Senegal, krajeap in Thailand, chin baung in Myanmar, and asam paya or asam susur in Malaysia.

In Sudan, Egypt and elsewhere in the Near East, it’s known as karkadé or carcadé.

In Chinese, it's 玫瑰茄 or 洛神花.
Summary of Research on Potency and currency powers of Hibiscus tea

Scientific interest in Hibiscus has grown in the last several years with burst of research studies in diverse angles of health. Hibiscus goes beyond its beauty and drinking for fun sakes. Sobolo(Hibiscus) has been used in folk medicine as a diuretic and mild laxative, as well as in treating cancer and cardiac and nerve diseases. Although information is limited, the potential for hibiscus use in treating hypertension and cancer, as well as for its lipid-lowering and renal effects, are being investigated. It is high in calcium, niacin, riboflavin, vitamin C and iron, as seen on the Purdue University page.

And the beverages have no caffeine. In East Africa, "Sudan tea" is consumed as medicine to cure coughs. In Guatamala, roselle is believed to cure hangovers. In Senegal, a roselle extract is said to lower blood pressure. In India, Africa and Central America, infusions made from roselle calyces or seeds are prescribed as a diuretic, to stimulate bile production and to treat fever. However, Roselle is known to be toxic in higher doses.

Probably, it might surprise our women but today you might be hearing for the first time. In the kitchen, hibiscus is delicious when tossed into fruit salads, used to garnish ice cream, thrown into tart and pie fillings, and blended into jams and jellies. To the alternative medical practitioners, when steeped into an infusion, it’s transformed into a tart-tasting tea that is loaded with antioxidants and vitamin C. This tea is often sipped to relieve coughs and treat colds; it is also highly regarded as an appetite suppressant, a diuretic, a hangover reliever and a circulation booster. However, its most valuable benefit may be in its role for cardiovascular health. To the conventional heart specialist I called its benefits an “Insurance cover to the heart”

The study authors concluded that roselle has a uricosuric effect and they suggested that the chemical constituents exerting this effect should be identified.

Research on Blood Pressure
Recent studies show that hibiscus tea can naturally lower blood pressure as effectively as some standard hypertension drugs. This isn’t brand-new information, as hibiscus has been used to treat high blood pressure in both African and Asian traditional medicine. In a clinical trial performed in 2004 and published in the journal Phytomedicine, hibiscus tea lowered the blood pressure of people with hypertension. In fact, it was as effective as the popular prescription medication captopril, don’t be surprised!

Another study this time presented to the American Heart Association in 2008, researchers found that drinking three cups of hibiscus tea a day lowered blood pressure by as much as 13.2 percent in pre- and mildly hypertensive adults. Researchers have a few possible explanations for this. Hibiscus is a natural diuretic, it opens the arteries, and it may act as a natural angiotensin-converting enzyme inhibitor, meaning that it slows the release of hormones that constrict blood vessels.

While more research is needed, many experts believe that incorporating hibiscus tea into a daily diet will prove beneficial for hypertensive patients.

Research on Weight Loss
For those considering weight loss some tea drinkers use hibiscus tea to aid that. The body produces an enzyme known as amylase which functions to break down complex sugar and starch molecules in food. When a person consumes too much carbohydrate-rich food (full of sugar and starch) that individual is most likely going to gain weight. According to pubmed.gov, hibiscus contains a substance that can inhibit the production of amylase. A person regularly drinking hibiscus tea can thus prevent too much absorption of carbohydrates and consequently not gain excess weight.

Research on Colds and Cough
For the cases of Cough and Colds, According to the book "Healing Herbal Teas," fresh hibiscus flowers contain around 6.7 mg of ascorbic acid, a form of vitamin C, which is one of the more essential nutrients needed by the body. Along with this significantly beneficial substance, hibiscus is known to have anti-inflammatory and mild anti-bacterial properties. Thus hibiscus tea is often used as a supplement to help treat coughs and colds. Because of its cooling effect, it is especially effective in reducing the discomfort of fevers that may accompany such ailments.

Research on Other Areas
The leaves are also used for animal food and fibre (Plotto, 2004). The seeds can be used to feed poultry as well as sheep and the residue from the seeds oil extraction can also be used to feed cattle and chicks (Al-Wandawi et al., 1984, Elamin et al., 2012, Morton, 1987 and Mukhtar, 2007).

In the Cosmetic industry, In Malaysia the oil is used to produce scrubs and soaps (Ismail, Ikram, & Nazri, 2008).

The best Hs grows in Sudan, however its quality is subsequently often impaired due to poor processing. Thailand has invested greatly in Hibiscus production contrary to China, where the product is less reliable and reputable due to less stringent quality control practices. However, China is the dominant supplier of the United States market ( Cooper, 1993, McCaleb, 2000, Mohamed et al., 2012 and Plotto, 2004). So what are we waiting for Ghana? We have the capacity to compete with the global world in terms of alternative medicine and now we have experts in this field now.

Beware of the Fake Hibiscus Tea now
There are lots of fake hibiscuses now in town. Some have even mixed the powdered hibiscus. We have to go into certified and organic ones. Until very recently, the Arab Republic of Egypt was the only source country for certified and organic certified hibiscus flower. In 2011 a number of producers and traders from Burkina Faso achieved certification through the FairTrade Labelling Organisations International FLO-CERT GmbH (http://www.flo-cert.net) (Brinckmann, 2011).

Dr. Raphael Nyarkotey Obu is a Research Professor of Prostate Cancer and Holistic Medicine –faculty of Holistic Urology, Da Vinci College of Holistic Medicine, Larnaca City, Cyprus. He is the National President of the Alternative Medical Association of Ghana (AMAG). A registered alternative Medical practitioner with specialty in orthomolecular oncology, Prostate Cancer Policy maker and researcher. He can be reached on 0541090045. E mail: [email protected]