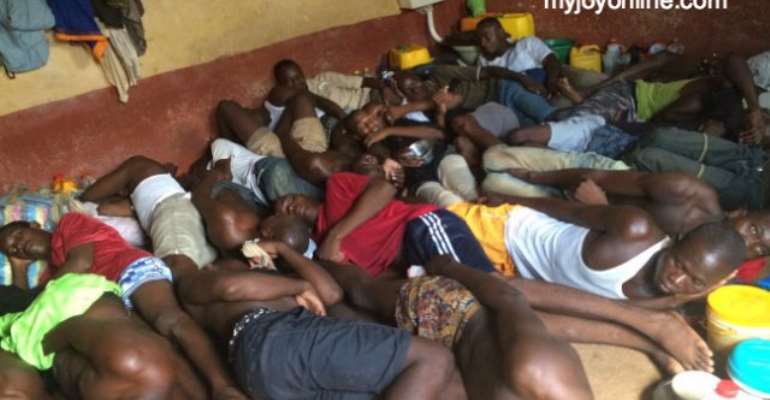 The Wa Prisons is in dire need of help. The facility which was established to detain 80 prisoners now has 225 convicts and remand prisoners.

The infirmary of the prisons only exists in name as prison officers pay the medical bills of sick inmates from their meagre incomes.

The inmates also depend on the benevolence of the prison officers when they are sick.

"Not even a paracetamol could be found here until the Wa Municipal Assembly and the medical superintendent of the Ahmadiyya Muslim Mission Hospital brought some drugs here and that we are managing with," the Upper West regional Commander Assistant Controller of Prisons(ACP), Victor Douchebe said.

Some of the drugs are not covered by National Health Insurance and that has also forced the prison officers to dip into their pockets to pay for the medical expenses of the inmates for them to be reimbursed later by the administration.

The facility has also been overtaken by bedbugs thus giving the inmates’ sleepless nights. They even have fears the bedbugs may transfer disease from one inmate to the other.

This came to light when officials of the Commission on Human Rights and Administrative Justice (CHRAJ) visited the facility.

CHRAJ embarks on an annual monitoring of detention centers across the country to observe the living conditions of inmates.

They monitor the inhuman and dilapidated conditions of prisoners and suspects to ensure their fundamental human rights are not violated.

The Wa prison was established some 96 years ago but has seen little renovation and expansion since its establishment. It has eight cells that have the capacity to detain maximum of 10 convicts or remand prisoners.

However, each cell is now housing at least 23 inmates.

During the night, there is no space for one to turn without making contact to the other as the inmates are crammed and packed together.

The toilet facility is just like any other thing in the room. Also, convicts have turned the water closet into a pillow which they lean on when they want to sleep because the sleeping area is not spacious enough. Inmates complain this makes them wake up with waist and neck pains every morning.

The inmates say they have to nudge their mates up to attend to attend nature's call. Failure to do so means they will step on their mates which will inconvenience their sleep.

"It usually ends in a fight between us, although we are not supposed to fight here, the conditions here makes that happen," of the convicts told Joy News' Rafiq Salam.

Another prisoner on remand disclosed that they have developed scabies as a result of bites from the bedbugs and congestion.

"I don’t know whether the bedbugs are manufactured here or not. There are times that we have to sit akimbo all night because of the bedbugs,’’ the convict told Salam.

Providing three square meals for the inmates is a major challenge for the authorities. The Upper West regional Commander Assistant Controller of Prisons(ACP), Victor Douchebe has complained about the allowance for each inmate.

"How do you feed an adult with ¢1.80 a day? Even our children we don’t give them such meager amount to take to school," Mr Douchebe.

He appealed to government to increase the feeding grants to enable them to provide quality food for the inmates.

Upper West Regional director of CHRAJ, Siddique Ubeidu said he was appalled by what he saw at the Wa Prisons and called on the government and benevolent organizations to come to their aid.