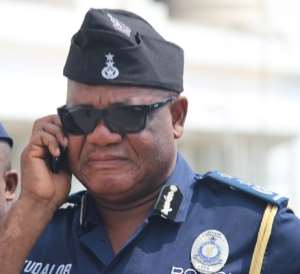 I know fully well that his quite sensitive position as New Patriotic Party’s Communications Director makes it very necessary for Nana Akomea to gingerly toe a diplomatically constructive path towards negative government policies. Still, sometimes the former Member of Parliament and Communications Minister, in the government of President John Agyekum-Kufuor, makes one scratch one’s head and wonder whether his current position as New Patriotic Party (NPP) Communications Director entails the mollycoddling of a clearly unabashedly partisan and pathologically dictatorial Mr. John Kudalor.

In less than one month, the Inspector-General of the Ghana Police Service has pontifically declared that he is far less interested in the administration of democratic justice and political accountability in the country than passively taking instructions from the Mahama-led government of the National Democratic Congress (NDC). And yet, somehow, the New Patriotic Party’s Communications Director would have Ghanaians believe that Mr. Kudalor is a first-class law-enforcement professional who is as equally concerned about his public image as his publicly stated determination to staunchly uphold the law, not to the highest standards of the ethics of his profession, as one would ordinarily expect of him, but rather to the utmost satisfaction of the man who named him to the highest job in the Ghana Police Service (See “Kudalor Risks Being Worst IGP – Akomea” Classfmonline.com / Ghanaweb.com 5/28/16).

In his latest attempt to peremptorily and summarily silence democratic dissent and transparency in the way and manner in which Ghanaian leaders are selected via the polling booth, Mr. Kudalor has declared that come rain or sunshine, he intends to shut down all social media networks in the country come November 7, the date scheduled for Election 2016. Needless to say, such declaration of raw power is perfectly in character with a man clearly appointed to ensure that his primary patron and benefactor retains his rocky occupancyof the Flagstaff House at all costs. And the most poignant response to such intended sinister act of downright criminality is for Nana Akomea to lamely admonish Mr. Kudalor to give some sobering thought to his professional image and legacy as possibly the worst IGP of postcolonial Ghana?

Maybe somebody ought to inform Akufo-Addo’s communications right-hand man that earning the reputation of Ghana’s worst Inspector-General of Police is far better than being ingloriously bunched up with those “nobody former IGPs” whom scarcely any living Ghanaian citizens remember. In other words, being dubbed or labeled as the “Worst IGP” still renders one a professional standout from among a largely nondescript pack. Of course, you may want to speak about the purportedly invaluable price of sporting or earning a good name and reputation, but the question worthy of critical examination is as follows: “How about those past IGPs whose existence nobody remembers or even cares to remember any more?”

Well, the story is humorously told of a police sergeant of the Nkrumah era who was spotted taking a miserly amount or payola – or bribe – from a commercial passenger-bus driver somewhere on the Accra-Kumasi trunk-road. Asked by a clearly puzzled onlooker whether he did not care about bringing down the name and reputation of the members of the Ghana Police Service, Sergeant Abongo Frafra scowled and sharply retorted, “Young man, mind your own damn business! Na titles I go chop?” In other words, both personal and institutional image and reputation were of absolutely no relevance to a woefully underpaid policeman.

You see, rather than apologetically admonish the IGP to “find the technology that can allow [Mr. Kudalor and his uniformed Abongo Boys and Girls] to trace unpalatable [behavior] and people who will abuse the media,” Nana Akomea and his colleagues and associate leaders of the political opposition ought to be huddling together and attempting to devise creative and inventive means of effectively neutralizing Mr. Kudalor.

Indeed, they have been fortunate enough to be alerted well beforehand that our national security operatives are hell-bent on muddying the electoral waters in order to ensure that their chief patron and paymaster escape with murder at all costs come Election 2016, and all Nana Akomea can say in response is “Please, look at your image and reputation in the mirror and from the history books and have mercy on us”? Huh, who born you by mistake, Nana Akomea?!