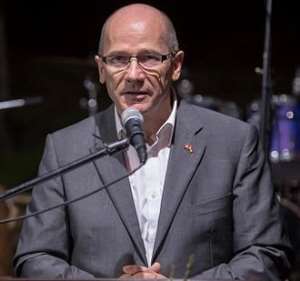 By Christabel Addo, GNA
Accra, May 19, GNA - Mr Gerhard Bruegger, the Swiss Ambassador to Ghana, has urged the academic community to strongly involve the private sector in the country's education.

Mr Bruegger, who was speaking on the topic, 'Using Middle Level Education for National Development', at the on-going International Conference on 'Academic and Professional Integrity', which opened in Accra, on Wednesday.

He suggested that the private sector be made responsible for developing some of the educational infrastructure and training programmes that were relevant to the needs of industry.

The partnership between the two sides, Mr Bruegger said, would not only open doors for on-the-job practical experiences for students, but would prevent skills mismatch and ensure high skills development to address the issue of quality output of graduates, especially those from tertiary institutions.

Mr Bruegger said students would have opportunities for apprenticeship programmes developed by industries as part of their training so that they would be able to apply their theoretical knowledge on the field before graduating.

The Conference was organised by the Learning Works Consultancy, an Education and Management Services Organisation, in association with Turnitin and Eiffel Corp, a Non-governmental Organisation on the theme: 'Rewriting the Educational Formula of Ghana'.

It sought to attract a healthy debate on the need for a private-sector-led partnership to reshape Ghana's education to meet the needs of industry and the environment both local and internationally.

Participants from the UNESCO, Local Universities, Technical Schools, the Ministry of Education, Teachers, the Diplomatic Corps, Local companies, Political Parties as well as the media, would discuss topics such as 'Developing Partnerships between the Professions, Business, Industry and Education,' and also look at the 'Selection and Assessment Regimes in Ensuring Educational Quality.'

Mr Bruegger recounted how vocational skills development was identified by the Swiss Government as a key component to employment and income since it provided good career prospects, especially for the youth.

He said Swiss Government had harnessed the potential of Vocational Education Training (VET) as a critical component of the mainstream educational system, especially for its youth, to build a strong human resource capital base, as a commodity to produce wealth and the development of the country.

Unfortunately, Ghana has not harnessed this opportunity, as VET had been left in the hands of the informal sector, which lacked the workplace experience component, he said.

He said by actively involving the private sector in education there would be a healthy link between theoretical and practical training, and the smooth integration of human resources into industry.

Society would also benefit from increased productivity, witness low youth unemployment, while there would be long-term economic prosperity and social stability.

He called for the strict implementation of legal and institutional frameworks, the adoption of other best practice cases where necessary, the creation of a brand for VET in society, and the improvement in the workplace component in Vocational Training for graduates.

Professor Ernest Aryeetey, the Vice-Chancellor of the University of Ghana, said the University acknowledged the need for strengthened private partnership in education, and so had in the last decade tried to reform most of its programmes.

It had put in place the required infrastructure to make them more relevant to the needs of industry.

The University, he said, had also instituted a strong Risk Assurance Unit to manage the shocks of its numerous challenges, including examination malpractices, which became a bane to the Institution in the past years.

He said the installation of Close Circuit Television cameras in examination halls, had helped in reducing examination malpractices, leading to the build-up of the integrity of examinations.

Prof. Aryeetey said for every institution to become better there was the need for it to acknowledge its challenges, which the University of Ghana had done and it was now making progress.

He expressed the hope that through these reforms people would regain confidence in the Country's tertiary education as they would begin to attest to the quality of output of graduates produced for national development.