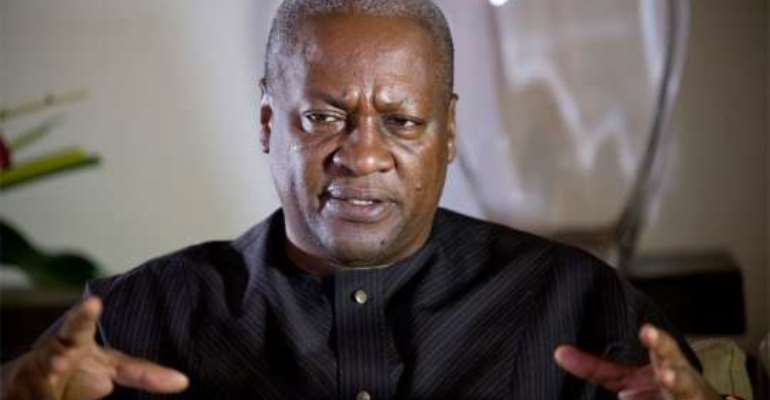 By Bertha Badu-Agyei, GNA
Koforidua, April 14, GNA - President John Dramani Mahama, has directed the polytechnics converted into Technical Universities to strictly focus on the sciences and technology and not to 'imitate the other public universities' to achieve the purpose of their conversion.

According to President Mahama, the conversion of the polytechnics into fully-fledged technical universities is to provide at least one public university in the 10 regions and to resolve the long standing job placement issues with polytechnic graduates.

President Mahama gave the directive at the inauguration of a new faculty building for engineering for the Koforidua Polytechnic, in line with the arrangement for the facility to become one of the technical universities in Koforidua on Wednesday as part of the accounting to the people tour of the region.

The faculty of engineering building inaugurated by the President consists of five laboratories, 10 workshops, 65 office spaces, six lecture halls and other auxiliary facilities needed as a university to upgrade its training.

He said government is using the German model in Technical and Vocational Education Training (TVET) in the establishment of the technical universities to in turn improve Ghana's TVET for socio-economic development.

President Mahama commended the Rector of the Polytechnic and the Chairman of the Governing Council Dr Mrs Smile Dzisi and Professor Mrs Esther Sakyi-Dawson, for their hard work in ensuring that the academic entity meets the criteria to become part of the first polytechnics to be a technical university.

He assured the school of an ultra-modern auditorium under the Ghana Education Trust Fund (Getfund), following an appeal made by the Rector.

President Mahama said government is undertaking a 'crash' infrastructure and development agenda in the other polytechnics who failed to meet the criteria and requirements for the conversion to the technical universities to upgrade their facilities for the purpose.

Dr Dzisi, the Rector said the polytechnic, has enhanced facilities with the inauguration of the Faculty of Engineering and an ongoing three-storey lecture hall blocks to increase its next admissions by 30 per cent.

She indicated that in fulfilment of the requirement of the technical university, 70 per cent of the academic programmes are in the science and technology disciplines and expressed the hope to get about 90 per cent in the near future.

Dr Dzisi, disclosed that in order for 'our graduates to become self-employers and not join the unemployed graduates, we have introduced entrepreneurial skills training as part of the schools courses to equip each and every student that pass through our gates to become an entrepreneur.'

She thanked the government and the Get fund for the huge infrastructural investment made in the school.

Bishop Dag apologises to Otumfuo over 'offensive' sermon
33 minutes ago

There's power in a father's encouragement – Pastor Otabil
33 minutes ago