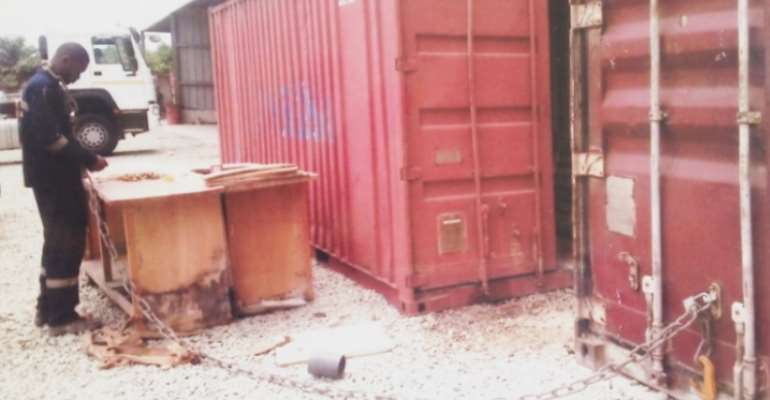 An Italian workshop supervisor has provoked anger at a company in a Free Zone Enclave in the Western Region after chaining one of his subordinates to a container in the hot sun as punishment for failing to complete a task assigned him.

The alleged culprit, identified as Manilo Maggiorotto, did the unthinkable with the reason that whenever he assigned work to the victim, he abandoned his and found ways of helping others to do their work.

Therefore, the best way to prevent a recurrence was to chain him. Seething with anger, employees of the multinational logistics company, Gateway Logistics Limited, operating as a Free Zone Company, have appealed to the Ministry of Employment and Labour Relations, the Ministry of Gender, Children and Social Protection and the Ghana Trades Union Congress (TUC) to ensure that justice was done the victim.

Alleged culprit
They described what Maggiorotto did as a re-enactment of the days of slavery – a dehumanising act which, they said, sent shivers down their spine. “He must be apprehended to face the laws of Ghana,” they said.

“This is a Free Zone Company. He is in Ghana as workshop supervisor, an expertise that could easily be procured in Ghana but they brought him here and he constantly looks down on us and treats us as if we are nothing,” they said.

When they were contacted the company, its management acknowledged the incident but declined to comment further as they were dealing with the issue.

How it happened
Describing the incident to the Daily Graphic, one of the workers said their supervisor, on the day of the incident, assigned two of the company’s workers to carry out a task and later reassigned one of them to a different task.

To work as a team, the victim, whose name was given as Ibrahim Sanou, decided to help another employee so they could finish on time.

The source said when the Italian supervisor entered the yard, he realised that Sanou was not doing what he had asked him to do.

“He, therefore, called him, verbally assaulted him and asked him to go and bring the chain from the container. When Sanou returned, Maggiorotto put it around Sanou’s neck and locked it with a huge padlock.

After that he dragged Sanou more than 100 metres to where he originally assigned him.” “The sad part is that he hooked the end of the chain to a container in the sun and went back to his air-conditioned office, ” the source said.

The source said after Sanou had finished the work, the Italian asked one of the workers to go and unlock the chain so that the victim would go and carry out other tasks.

Workers
According to the workers, morale was currently down in the company and the victim, once jovial and energetic, was constantly depressed.

The workers were seeking justice and urged management of the company to ensure Maggiorotto left the workshop for his own safety. That aside, he should apologise to the victim and appropriately compensate him.

When the Daily Graphic visited the company, the workers expressed the view that management was trying to influence the victim financially to say he was not interested in the case.

Dehumanising
At the office of the General Transport, Petroleum and Chemical Workers Union (GTPCWU) of the TUC, the Regional Industrial Relations Officer, Mr Hanson Richard, said the issue had been reported to the union.

“We are aware management is talking to the victim to withdraw the case, but this is a national issue and it is wrong to dehumanise a national to that extent,” he said. Mr. Richard said the union had explained the implications of any inducement to suppress the case and that the national union would take over the case.

“I will pursue the case to ensure that Sanou received justice after which they would demand the repatriation of Maggiorotto to serve as deterrent to others,” he said.

He said several meetings with the management of the company indicated that they were also taking up the issue and the GTPCWU would ensure the law was duly applied.

He recalled a recent case in Accra where a supervisor was reported to have slapped a worker with hot pizza and the locking of workers out without prior notice at various yards in Takoradi.

He urged expatriate workers to learn how to relate to their colleagues.

Company’s reaction
After several attempts to elicit the reaction of the company, the Managing Director, Mr William Moss, agreed to grant an interview March 23, 2016.

However, about 2:30 p.m, Mr Moss called to say he could no longer grant the interview without consulting the local union. He expressed wonder as to what interest the newspaper had in the matter and ended the call.

Memo to workers
However, the Daily Graphic later intercepted a March 21 memo from the Managing Director notifying the employees that Mr Maggiorotto had relinquished his post and returned to Italy with his wife. “I would like to thank Manlio for all his efforts over the past years in the face of considerable difficulties.

He brought new levels of engineering experience and competence to the maintenance function and it was through his dynamism that the workshop at Bokro was created,” it said, adding that “He will be greatly missed”.