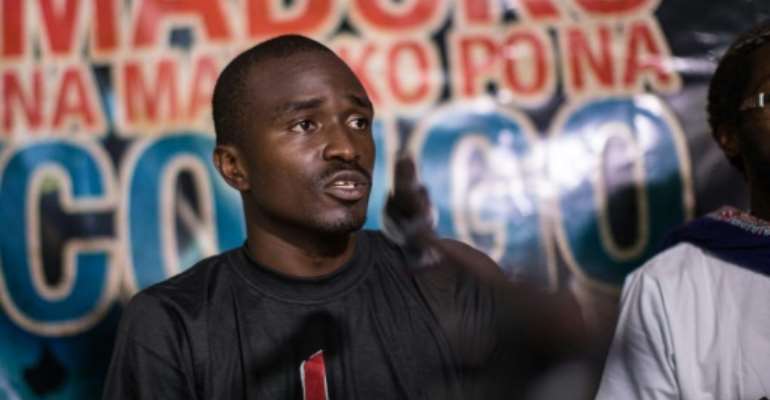 Fred Bauma from the Congolese Lucha movement speaks during a press conference in Kinshasa on March 15, 2015. By Federico Scoppa (AFP/File)

Kinshasa (AFP) - Two activists arrested at a pro-democracy workshop in the Democratic Republic of Congo have gone on hunger strike, the pair's lawyer said Friday.

Fred Bauma, 26, and Yves Makwambala, 33, who were detained on March 15, 2015, have refused food since Tuesday, according to the LUCHA pro-democracy movement of which Bauma is a member.

Their lawyer, Beaupaul Mupemba, described the pair as "physically weak".

They were refused bail earlier this week by the country's supreme court.

Eighteen LUCHA activists were arrested in Goma, in the country's east, during a peaceful march on Tuesday to protest the supreme court's decision.

Bauma and Makwambala's arrest came amid a government crackdown on those speaking out against President Joseph Kabila's bid to extend his stay in power beyond a constitutional two-term limit, ending December 19.

The pair were arrested along with at least two dozen other people during a workshop on good governance in Africa.

Authorities then accused them of planning terrorist activities and a violent insurrection. They were held without charge for weeks and then transferred to Kinshasa's main prison where they remain.

In June last year they were charged with belonging to an association formed to attack people and property, plotting a conspiracy against the head of state, and attempting to either destroy or change the constitutional regime or incite violence against the state.

We were not influenced by any party to reject your rice, we ...
7 minutes ago