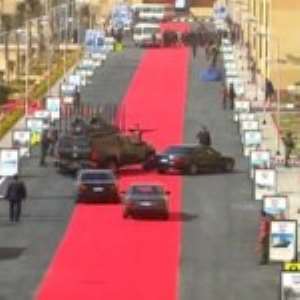 The use of a red carpet for the motorcade of President Abdul Fattah al-Sisi has provoked criticism in Egypt.

Cars carrying Mr Sisi and other officials drove down the red carpet on Saturday as they were visiting projects in 6 October City, a suburb of Cairo.

Several commentators questioned the apparent extravagance, just as the president was making a speech about the need to cut government subsidies.

The military said the carpet was meant to give joy to the Egyptian people. ‘Hypocrisy’

Criticism of Mr Sisi, a former military chief who led the overthrow of President Mohammed Morsi in 2013, is rare in mainstream Egyptian media.

But media personalities and activists mocked the fact that pictures of the presidential motorcade driving down a road covered in red carpet were broadcast shortly before Mr Sisi gave a speech in which he warned the state could not continue subsidising water and electricity bills for low-income families.

.
Youssef al-Husseini, a presenter on the private ON TV, asked: “How could you reach such a level of hypocrisy by rolling out red carpets on the streets for the president’s motorcade? Could we not have spent the money on buying duvets for people freezing in the cold?”

Haytham Muhammadayn, a member of the Revolutionary Socialist movement, posted a screengrab on Facebook with the comment: “Sisi is trampling on the people’s money.”

However, the deputy head of the military’s moral affairs department, Brig Ihab al-Qahwaji, stressed that the carpet was only made of light cloth and had been used for more than three years.

“The carpet is not expensive, and it was used before and will be used in other coming ceremonies,” he told CBC TV on Sunday.

“We want to give the impression that Egypt is moving in the right direction, and we want to present a bit of joy to our people,” he added.