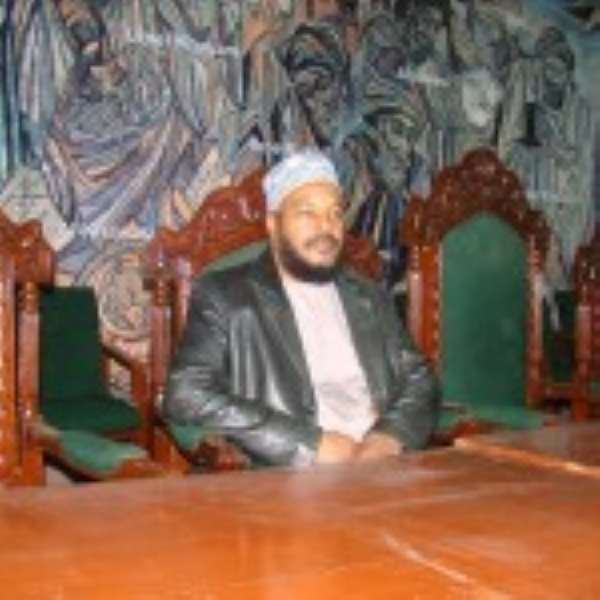 An Islamic preacher, Dr. Abu Ameenah Bilal Philips, who was 'secretly' indicted in the 1993 bombing of the World Trade Center and deported from the United States in 1994, is currently in Ghana offering teachings to Muslims in the country. Dr. Abu Ameenah Bilal Philips, a Canadian citizen, has also been banned from entering the United Kingdom and Australia. Born Dennis Bradley Philips, the Canadian Muslim teacher, speaker and author who resides in Qatar, appears on Peace TV, which is a 24-hour Islamic satellite TV channel. He was deported from the Philippines, Bangladesh and Kenya, where he had been invited to address Islamic conferences. Sheik Philips is said to have written: “Western culture, led by the United States, is the enemy of Islam.” The US Government named him as an “unindicted co-conspirator” in the 1993 bombing that killed six people and injured 1,000. He was deported from the US in 2004 – [Quoted from the Sun Herald Newspaper in the UK]. Sheik Philips' activities in Ghana as advertised on his official Facebook page, which started from the 4th February, ends on the 12th February. His programmes have taken place in various parts of Accra and in Kumasi, specifically at the KNUST. He is expected to be in Tamale for another lecture at the Tamale Jubilee Park today [Monday] February 8, titled “Islamic Identity Under Globalization” between 8:00 and 11:00pm. At the Tamale UDS on the 9th, he will hold another lecture titled “Islam and Media: Enemies or Foes” from 10:00am-12:00pm. He has already delivered lectures on the theme “Insurgency In God's Name: Revelation or Rebellion”.

Dr. Bilal announced his schedule and activities in Ghana on his Facebook page

ISIS Alert It would be recalled that in August 2015, Ghana's National Security issued an alert about recruitment of Ghanaian students to join terrorist group, ISIS. The National Security Co-ordinator, Yaw Donkor, said his outfit had identified suspected institutions where agents and agencies of the terrorist group targeted and recruited unsuspecting Ghanaians. This was after a 25-year old former student of KNUST Nazir Nortei Alema, was confirmed to have who left home to join the terrorist organization. It is unclear whether the country's national security is aware Dr. Bilal Philips' activities in the country, and whether he is indeed preaching extremism. Yemeni Ex-Gitmo detainees Dr. Bilal Philips comes into country at a time when Ghanaians have expressed concerns about possible external attacks from Islamist extremists following government's decision to host two former Guantanamo Bay detainees from the United States, believed to have repented and thus poses minimal risk.

.
Dr. Bilal Philips in one of his lectures
Dr. Bilal Philips has repeatedly denied connections to terrorists insisting the west led by America, is only demonizing him. In a letter he personally wrote while in detention in the Philippines where he was later deported for the same accusations, he accused the western media of sensational journalism meant to portray him as evil.

A portion of the letter he wrote while in detention in the Philippines.

In his letter, he denied most of the allegations made against him, saying Germany for instance had not banned him as had been reported, and that he won a lawsuit against the Mayor of Frankfurt who unilaterally attempted to deport him over terrorism allegations. He said in all the places he has been banned including the US, there has not been any evidence to prove that he is linked to terrorists or that he promotes terrorism, insisting his teachings of peace rather seeks to eliminate extremist ideas among Muslims particularly the youth. His personal letter was published on September 13, 2014, on an Islamic website muslimmatters.org. Dr. Bilal Philips aside his conferences, uses social media platforms such as YouTube, Twitter and others, effectively, to propagate his teachings. His official Facebook page currently has over 4.3 million likes, and he runs what he calls an Online Islamic University where he offers free tuition and certificates to Muslims who enroll. Terror links Intelligence sources said he is closely identified with Mohammed Jamal Khalifa, brother-in-law of the late Al-Qaeda leader Osama bin Laden. Khalifa stayed in Mindanao for several years in the 1990s. When Khalifa was in the Philippines, Philips reportedly visited Cotabato City and planned to build an Islamic center in Maguindanao, according to Rappler executive editor Maria Ressa in her book, From Bin Laden to Facebook. She added: “According to a confidential document provided by US intelligence in 2004, Philips headed the Islamic Information Center (IIC), now known as Discover Islam, in Dubai, United Arab Emirates.” While Philips has denied any terrorist connections, Ressa wrote that he was “secretly indicted in the 1993 bombing of the World Trade Center and deported from the United States in 1994. Since then, he has been expelled from a number of Western countries ̶ denied entry to Australia in 2007 and deported from the UK and Germany in 2010.” One of the principal suspects in the 1993 World Trade Center bombing, Ramzi Yousef, operated in the Philippines and was linked to a failed plot to kill then Pope John Paul II during his visit to Manila in 1995. Religious persecution Several Muslim leaders and human rights advocates believe Philips has done nothing wrong to merit deportation. “This harassment by the authorities against Dr. Philips is an act to dishonour a visitor of Muslims in Mindanao. Being prevented from visiting to preach to his Muslim brothers and sisters in Mindanao is a form of religious persecution,” Mindanao Human Rights Action Center executive director Bobby Benito said. On his Facebook page, which has more than 4 million followers, Philips is described as a former Christian who converted to Islam in 1972. He was born in Jamaica but grew up in Canada. Philips took Arabic courses and completed his degree at the College of Islamic Disciplines at the Islamic University of Madeenah and he took his masters in Islamic Theology at the University of Riyadh. In 1994, Philips finished his doctorate degree in Islamic Theology at the Islamic Studies department at the University of Wales. His Facebook page also claimed that Philips taught at the Islamic Studies department of Shariff Kabunsuan Islamic University in Cotabato City. Philips is currently a lecturer for Islamic Studies and Arabic at the American University in Dubai and the Ajman University at the United Arab Emirates.