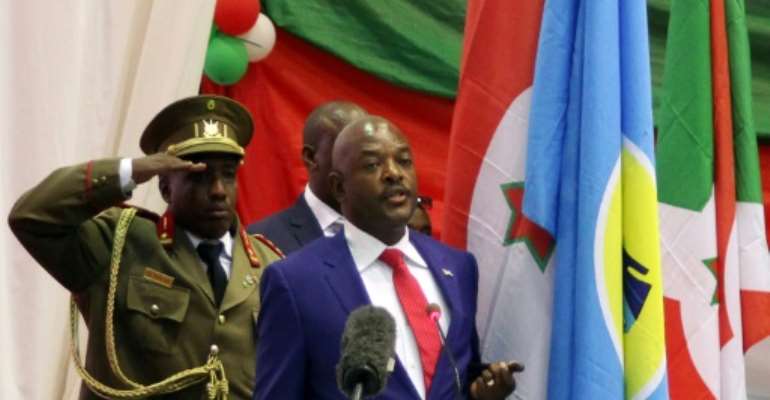 The panel said in a confidential report obtained by AFP on Thursday that they had spoken to 18 Burundian refugees who provided details of their military training last summer in a Rwandan forest camp.

"They reported that their ultimate goal was to remove Burundian President Nkurunziza from power," said the report by the panel of experts for the Democratic Republic of Congo.

The refugees, who had crossed into the DR Congo, told the experts that they had been recruited in the Mahama refugee camp in eastern Rwanda in May and June 2015.

The group was given two months of military training in Rwanda by instructors, some of whom were Rwandan military personnel, the report said.

"Their training included military tactics and the maintenance and use of assault rifles and machine guns, as well as ideological and morale-building sessions," it added.

Some were also trained in the use of grenades, anti-personnel and anti-tank mines, mortars and rocket-propelled grenades.

Six of the 18 trained combatants were minors.

The refugees told the experts that at least four companies of 100 recruits were being trained at the camp.

The Burundian combatants showed the experts fake identification cards from the DR Congo that were produced in Rwanda.

There have been several accusations of Rwandan military involvement in Burundi, which has been in turmoil since Nkurunziza announced plans in April to run for a third term, which he went on to win.

The US-based advocacy group Refugees International said last month that men and boys were being recruited from Mahama camp and facing threats if they refused.

Burundi has repeatedly accused Rwanda of backing rebels intent on overthrowing the government in Bujumbura, allegations Rwanda had denied.

"I haven't even seen the tiniest evidence of that so it becomes a lot of politicking," Rwandan President Paul Kagame said in December, calling the accusations "childish."

Free SHS Graduates Gather To Campaign For NPP
35 minutes ago