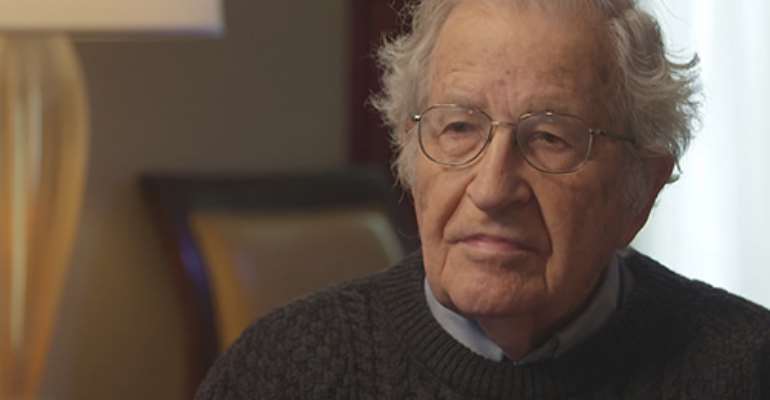 “I’m not an absolute pacifist,” he said. “I think there are times when the use of military force defensively is legitimate.”

"Defending the Kurds against the ISIL attacks, yes, that’s legitimate,” he added, explaining that the "Kurdish areas of Syria" constitute a "fairly decent society" which "certainly merit support" from the US air force.

Chomsky condemned the Turkish President, Recep Tayyip Erdogan, who in a public address criticised "so-called intellectuals" like Chomsky for supporting Kurdish separatists, and invited the MIT professor to visit Turkey.

In the interview, Chomsky, who has accused the Turkish government of carrying out a “terrorist” war against the Kurds in the past, called the Turkish president “a murderer” in relation to the Turkish army’s military offensive against Kurdish rebels in the country’s southeast.

Chomsky was asked whether he supported the Kurdish PKK and asked to address their acts of violence against Turkish civilians.

“They have carried out attacks on civilians, yes,” he said. “I'm not saying we should give military aid to the PKK. On the other hand, if we are interested in attacking ISIS, and saving the Yazidi, and saving the Kurds, we can’t say we are going to attack them.”

“There’s plenty of evils in the world, but we have to deal with the world as it exists,” he added. “If you want to defend the Kurds, you cannot be attacking the Kurds.”

Discussing the spat between Presidents Erdogan and Putin following the shooting down of a Russian jet in Turkish airspace, Professor Chomsky said: “That's the kind of thing that could set off a major war. And what were the consequences? The consequences were as expected, that Russia greatly increased its military forces in the region, put in advanced missiles, sent a missile cruiser. I mean, you don’t play games like that.”

On the subject of the pro-Palestinian Boycott, Divestment and Sanctions (BDS) movement, Chomsky was asked by host Mehdi Hasan whether it was a "mistake" for BDS campaigners to target Israeli artistic, cultural and educational institutions, too.

“I think it is,” he said. “Just as I do not suggest boycotting Harvard University and my own university, even though the United States is involved in horrific acts.”

Chomsky distinguished between those BDS campaigns "aimed at the occupied territories,” the "kind that I support," and "actions against Israel itself,” which he dismissed: "You might as well boycott the United States.”

UpFront, hosted by Mehdi Hasan, broadcasts on Fridays at 19.30 GMT, after which it will be available at www.aljazeera.com/upfront. Follow UpFront on Twitter @AJUpFront.