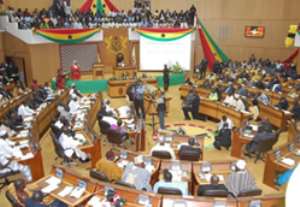 Some 125 Members of Parliament risk losing their seats for repeatedly absenting themselves beyond the limit that the Constitution allows.

Odekro, an advocacy platform that seeks to promote transparency, accountability and democratic governance through citizen action and engagement with relevant government agencies, has written to the Speaker of Parliament demanding that 125 seats be declared vacant because the occupants vacated their post.

The figure represents 45.2%, or nearly half of all Members of Parliament who were absent for at least fifteen days or more between January 2013 and July 2014.

The list has the names of MPs from both the National Democratic Congress (NDC) and the opposition New Patriotic Party (NPP). Those on the list of the absentee MPs include ministers of state and deputies.

Odekro is by the letter asking the Speaker to declare the seats of the identified MP’s vacant if they have failed to offer reasonable explanations for their absence to the Committee on Privileges.

According to Odekro, the Constitution stipulates that if these 125 MPs are unable to provide “reasonable explanations” for their absence to the Parliamentary Committee on Privileges, they must vacate their seats.

Odekro says if nothing is heard from the Speaker of Parliament in 15-days, they will go to court to pray for an order to declare the seats vacant.

It said “If the court order is granted and/or the Speaker declares these seats vacant, the practical result would be that many of the MPs who were recently re-elected by the NDC and NPP as Parliamentary candidates will have to contest by-elections to retain their seats, before the general election in November 2016.”

Odekro seeks to empower communities and marginalized populations to promote transparency, accountability and democratic governance through citizen action and engagement with relevant government agencies. Specifically, the intervention will focus on the Parliament/Legislature of Ghana.

Odekro says its aim is to monitor the activities of parliament for the benefit of national development.

“Our goal is to harness technology in order to create a national platform for promoting transparency and popular participation by providing public online access to Bills, Motions, and Parliamentary debates (Hansards).

Odekro believes that parliament remains a crucial engine for the country’s democracy.

“While the majority of its workings, votes, motions, committees take place in the open, too often, information that’s technically available is difficult to find, access and use. This independent, non-governmental platform aims to make some of that information more easily accessible.”