Konadu Speaks: Why My Husband Booms 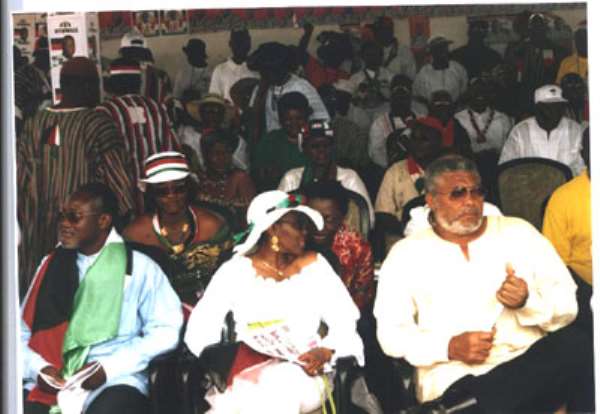 * Refuses to dismiss reported presidential ambition * Denies being 'she who must be obeyed' * Selassie Djentuh wasn't molested * Gladys Asmah instigated destruction of DWM projects Former First Lady, Nana Konadu Agyemang Rawlings, has in a rare revelation blamed former President Rawlings' constant boom speeches on the fact that he worked as a jet fighter pilot in the Ghana Air Force.

“I think the engines affect their ears so when they speak they speak louder than anybody because they think you can't hear them”, she revealed.

Speaking on Metro TV's primetime programme 'Good Evening Ghana' Tuesday night, Mrs. Rawlings said that must explain the cause of her husband's boom speeches “because he thinks he must be heard”, saying that she has seen it with a lot of more fighter pilots.

Sporting a well-looking, trimmer, beautiful and sexier body that did not reflect her age of 55 years (she revealed she will be 56 later this year), the president of the 31st December Women's Movement also told the host, Paul Adom Ochere, that their children are being educated abroad because the Ghanaian press were harassing them.

According to her, she thought it was unfair at first but later changed her position when she realized the sort of lies that were being told about them in the media.

“It was something that was difficult for them to bear”, Nana Konadu noted, and especially also when the Children knew there were no special privileges for them even though their father was the head of state.

Confronted with the fact that her daughter had the privilege of piloting under the tutelage of the father, Mrs Agyemang-Rawlings said Rawlings allowed his daughter to fly the state aircraft to “encourage more women into the air force” and that the former President actually wanted to tell younger girls that it could be done.

Nana Konadu maintained that the whole Rawlings household, including the children are happy now that they have more of their father and husband at home.

Speaking of whether her NGO, the 31st December Movement, was as strong as it used to be, Mrs. Rawlings said her movement is not visible nowadays because they don't get the required publicity from state-owned media such as GTV.

However the organisation's almost one million members, according to the former first lady, were still very strong on the ground empowering the Ghanaian woman, stressing that “the red berets are not lost at all”.

She accused the NPP government of politically harassing her and some executive members of her NGO with state institutions such as the SFO, the Attorney General's Department and many other agencies. Looking worried at one stage of the interview, she asked whether it was wrong for them to provide 42 communities with water.

She also had some blame for the nation's historians as well as intellectuals whom she said were not doing justice to our country by not telling what actually this country has gone through, reminding the host of the times when people queued for anything from toilet rolls to tooth paste.

“It's a shame that people are always lying in this country because we are not setting good examples for the younger ones to follow”, Mrs Agyemang-Rawlings observed.

She denied any knowledge about the gruesome abduction and murder of the three High Court judges and the army officer in the heat of the husband's 1981 revolution. She could as well not believe that Amartey Kwei, who was convicted for perpetrating the act, could also do a thing like that.

Reminded that Amartey Kwei was said to have picked the keys of the Jeep that used to execute the act on her dining table and that there were speculations that when Amartey Kwei told her what he had been tasked to do, she (Konadu) told him to kill them, Mrs. Rawlings replied that she kept so many keys on that particular dining table, explaining that because of the curfew at the time the people thought that her house was a safe place to keep their cars and such items.

She couldn't however have known which keys belonged to which car, she further added. Konadu could not tell the host whether she has any presidential ambition, stressing that “in life you never say never because you don't know what circumstances would put you in what situation”.

“I hate to predict the future because I am not God so I cannot play God”, she noted adding, “I love my party and whatever role I will do to let my party win I will do it”. Konadu also denied that Selassie Djentuh, a former boyfriend of Ezanetor was molested, saying that she would the Djentuhs to their conscience as to whether they told the truth on their alleged ordeals after Selassie broke up with the eldest daughter of the Rawlingses.