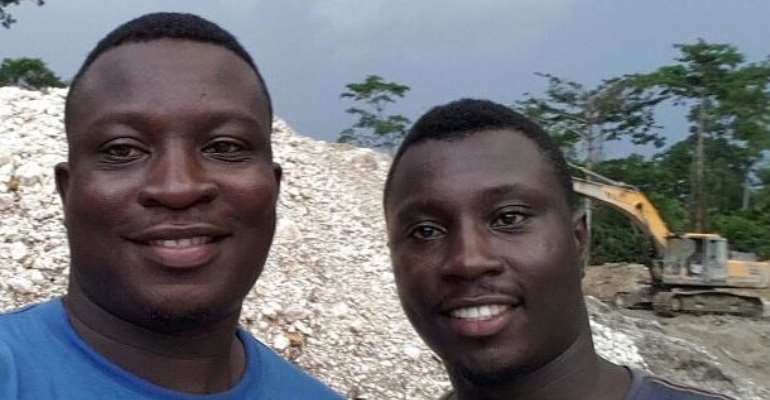 In part four of this running story, we bring to readers and followers of this fraud, the impact the story is making as the fraudstersappear to be very unhappy with the news publications and have continued to expose themselves through their rage.

This is how a female associate of the Fraudster by named Yaa Aswegnlaa Nkrumah, rained insults on Delina, a friend of the Victim, Madam Dagmar.

The conversation below shows how Yaa went dirty as she defended the fraudsters.

Madam Dagmar has also vowed to use all legal means to get her money back from the hoodlums and it appears the fraudsters are not happy about the series of online publications and exposé.

We shall continue to update readers and followers on any latest events as the drama unfold.

Delina: Please read these articles, it's about friends of us on FB

It has emerged that Madam Dagmar, a German woman believed to be in her fifties, who was deceived in the name of love, marriage anddoing business in Ghana, h

Yaa: Madam I'm so not interested in your lies When they where f*cking other all in the name of love did they publish it?

Delina: Well... Thanks for sharing I didn't know they where f*cking other in the name of love. Interesting news to me. I will tell my friend about it. Maybe the police caninvestigate

Yaa: Where there not married? Didn't your friend come to Ghana? Don't share your lies with me I'm not interested! Delina: READ THE ARTICLE - you will find the answers there Yaa: It's a human being who wrote the article...ryt?

Delina: It's the woman who got duped by the familiy Yeboah who wrote the article. Those guy cheated, stole, lied and hurted all the way.

Yaa: Fine.....not interested!!! Delina: OK with me. Hope you never get cheated and lied to by any man

Yaa: All you guys know is extortion... you wanted ghanaian gold

Lol funny I haven't even seen some yet... Delina: Think about it whenever a guy tells you sweet words. He maybe wants sex or money.

Yaa: Duh... Your friend she have known better She was interested in a strong black man!!! Delina: Because someone should know better, does it allow another one to steal and cheat?

Yaa: Exchange is no robbery!!! Now are u telling me she never got gold from the guy?

Karma is always a b*tch... u know? Sorry it blasted... but u going abt telling ppl changes nothing. Just allow the police to investigate

Delina: Thanks for letting me share your thoughts. I will tell her and she can make it public what a Ghanaian thinks about another Ghanaian.

Yaa: Duh... For all I know it marriage that turned to business Delina: You know the guys? Did they got into your mind too? Did they try to bewitch you to fall for one of them?

Yaa: Now you want revenge All the best!!! Delina: Well, I am not involved. She is my friend and I do a few things to help her.

I will copy our chat for my friend. Whatever she makes out of it, we will see!

Korle-Bu Doctors Threaten To Withdraw Services Over Lack Of ...
1 hour ago