Let It Be A Trial By Jurors And Not Jurists 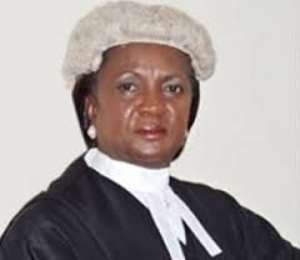 The last person that Justice Paul Dery has a reason to fear is not the path-breaking investigative journalist who exposed him and his judicial colleagues for corrupting the stature and integrity of his office, but the question of whether, indeed, he committed any of the crimes he is accused of having committed (See “Embattled Justice Dery’s Suit: The Cat Is Already Out of the Bag – Law Lecturer” MyJoyOnline.com / Ghanaweb.com 9/14/15).

If he strongly believes in his innocence, or there are any extenuating circumstances convincingly contradictory of the videotaped evidence allegedly portraying the High Court judge as being patently unequal to his performance, then rather than seek an injunction to stop the public broadcasting of the evidentiary document reportedly composed by renowned media operative Mr. Anas Aremeyaw Anas, what Justice Dery ought to be doing right now must be about the solid and formidable preparation of his counter-evidence, and one that is pointedly aimed at seriously undermining the professional credibility and integrity of his accuser.

Clearly, what is at stake here is the credibility of both the 34 judges and magistrates who were exposed for being pathologically corrupt and professionally incompetent, and the possibility of their having criminally breached their professional code of ethics, and that of the man who courageously undertook to expose these men and women of the bench for decidedly lacking good moral judgment and integrity. As of this writing, it had been reported that at least one of the judges accused of corrupting their offices had been cleared of any wrongdoing.

There appears to have been a mistaken identity. If this report is accurate, then the wrongfully accused judge may well decide to sue Mr. Anas for defamation of his character and professional conduct. It is too early at this juncture to draw any conclusive judgments, but it is quite obvious that such a grievous faux-pas puts a considerable dent into the professional integrity and credibility of the country’s foremost investigative journalist as an uncompromising crusader for justice and integrity.

As to whether or not his clearly well-deserved celebration as a hero would be sustained in the long run, pretty much depends on the number and percentage of bench operatives who would have pleaded guilty or been found criminally culpable by the end of this entire saga. As of this writing, it had also been reported that at least one of the remaining 33 judges had pleaded guilty to the charge of having accepted bribes and/or other favors as a means of influencing his/her decision on a case or cases pending before him or her.

The name and/or gender of the apparently contrite judge or magistrate had yet to be revealed. And so at least at this juncture, Mr. Anas may be aptly said to be 50-percent on target. The accuracy of his investigative targeting may well shoot past 80-percent or may well be considerably less. Either way, it may be far too early in the game for the general public to pass any meaningful judgments one way or another, even after the scheduled public broadcasting of some of Mr. Anas’ video- and audiotape documentary.

As for Justice Dery’s bitter complaint that he had been recorded taking a bribe or bribes without his “knowledge or permission,” it only complicates the question of the integrity and credibility of such complaint. It also points to the possibility of Justice Dery’s being clinically retarded. Indeed, if he knew anything worthwhile about media practice, Justice Dery would have appreciated the fact that investigative reporters or journalists are not in the unsavory habit or business of protecting the very people, or subjects, whose targeted gross misdeeds they are trying to expose for the improvement in the quality of the civic life of members of society or the general public. If he is convinced of having engaged in any wrongdoing, he had better come clean and promptly confess to the same, if Justice Dery is to at least partially redeem whatever may be left of his personal and/or professional integrity. Attempting to use legal technicalities as a subterfuge would only aggravate matters or further incriminate Justice Dery.

Needless to say, Dr. Adusei Poku, of the University of Ghana’s Law School, is quite accurate to observe that in the era of globalization and social networking, the flow of information readily transcends and effectively dwarfs national boundaries. Where I come in on this issue is to advocate for a trial by jurors, whereby ordinary Ghanaian citizens are allowed to weigh in on evidence presented in court and, led by judges and prosecutors, allowed to impartially determine the merits and demerits of each and every one of the cases brought against the 33 members of the august bench.

Indeed, contrary to what the likes of Dr. Adusei Poku would have the rest of us believe, a trial by jurists would be akin to the traditional old boys’ and girls’ network, whereby equally incompetent and criminally corrupt and culpable members of the judiciary may be tempted to draw up a cordon of mutual self-protection, with a supremely concerned and interested general public being flagrantly left out of the loop.

The preceding would be clearly tantamount to a travesty of justice. These allegedly corrupt judges have routinely and perennially sat in judgment of the rest of us members of the general society. Now it is our turn to size up their integrity and social conduct and reward or punish them on a case-by-case basis, as we have been done by them.