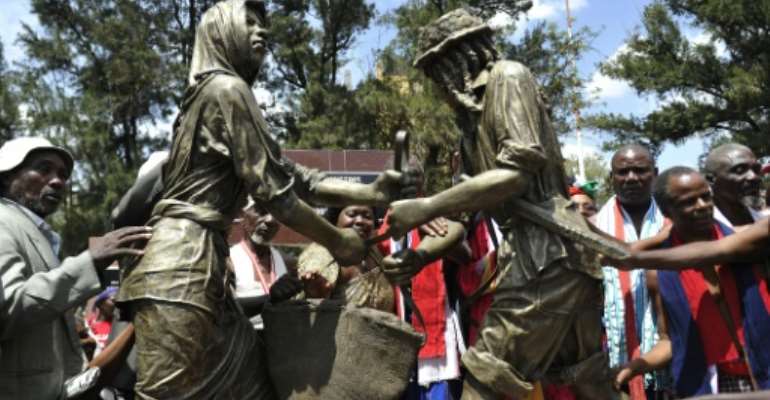 Kenyans attend the unveiling of the memorial dedicated to the thousands killed, tortured and jailed in the Mau Mau rebellion, during a ceremony in Nairobi, on September 12, 2015. By Simon Maina (AFP)

Nairobi (AFP) - A British-funded memorial to the thousands killed, tortured and jailed in the Mau Mau rebellion was unveiled in Kenya on Saturday, in a rare example of former rulers commemorating a colonial uprising.

At least 10,000 people died in one of the British Empire's bloodiest insurgencies -- some historians say over double that -- and the security operation to tackle the 1952-1960 struggle was marked by horrific abuses.

The guerrillas, mainly from the Kikuyu people, terrorised colonial communities with attacks from bases in remote forests, challenging white settlers for valuable land.

But while attention at the time focused on 32 murdered settlers, the number of Kenyans killed was far higher.

Thousands of Mau Mau veterans crowded into the memorial site, dancing and singing, as the ribbon was cut and it opened to the public.

"It is a special day," said Gitu wa Kahengeri,

Britain's High Commissioner to Kenya, Christian Turner, said he was "humbled" to be at the ceremony.

"I hope that this memorial will allow us to acknowledge and discuss together the issues arising from a difficult period in the history of both Britain and Kenya, and that it offers us the opportunity to draw a line and move forward," Turner said.

"This is the right thing to do for those of you who suffered, for Britain and Kenya, and our joint relationship," he said. "To deal with the present and move forward into the future, we have to recognise and learn from the past."

British and Kenyan flags fluttered over Nairobi's Uhuru, or "Freedom", park, with a crowd of several thousand Mau Mau veterans surrounding the memorial, many still with their trademark but greying dreadlocks.

Many of the Mau Mau veterans, well over 70 years old, were wearing T-shirts adorned with the slogan "heroes". Turner was given a huge cheer, and many of the former fighters pressed forward to shake his hand.

"The memorial will serve as a symbol of reconciliation," Kenyan Foreign Minister Amina Mohamed said.

Kenya Human Rights Commission (KHRC) chief Makua Mutua said that "colonialism was a crime against humanity," but said that the British apology was accepted.

"The arc of history is long, but it bends towards justice," Mutua said, celebrating that now "perpetrator and victim, colonised and colonisers, can be together."

Turner himself described how his step-grandfather had been Kenyan police chief during the colonial period, resigning in 1954 over the "colonial administration's failure to address brutality committed by the security forces."

The memorial features a statue of a dreadlocked Mau Mau fighter armed with a homemade rifle being handed food by a woman supporter. Although a joint project between Britain, the Mau Mau Veterans Association and the Kenya Human Rights Commission, the £90,000 ($138,000, 124,000 euros) bill was paid by London.

"This memorial is a symbol of reconciliation between the British government, the Mau Mau, and all those who suffered," reads the stone plaque on the memorial.

The commemorative statue follows a June 2013 decision by Britain to compensate more than 5,200 elderly Kenyans tortured and abused during the insurgency. The £19.9 million deal -- separate from the cost of the memorial -- followed a four-year legal battle.

Professor David Anderson, author of "Histories of the Hanged" -- one of the first books to fully document the extreme abuses -- said the memorial was "long overdue".

While the Mau Mau were ultimately defeated, their struggle was seen as a key step towards Kenya's independence in 1964.

But the struggle also created bitter divisions within communities -- as some of the worst atrocities were carried out between Kenyans loyal to colonial forces and the Mau Mau.

Kenya's founding president Jomo Kenyatta -- whose son Uhuru is president today -- opposed the violence carried out by the Mau Mau, and the group remained outlawed until 2003.

Ho West Tension: Killer Reports Himself To Police
41 minutes ago