ECOWAS will not relent in its fight against Small Arms 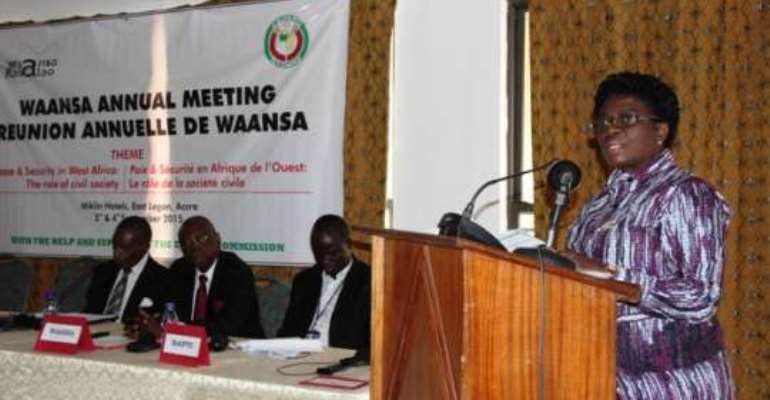 Accra, Sep 7, GNA - Mrs Salamatu Husseini Suleiman, Commissioner for Political Affairs, Peace and Security, ECOWAS Commission, has called for concerted efforts from member-states, in an effort to confront challenges pertaining to Small Arms and Light Weapons (SALW) in the sub-region.

She said the Commission on its part was not resting on its oars in mobilizing additional resources through its development partners in support of member-states, to effectively fight the illicit proliferation of SALW in the sub-region.

Her call was contained in a message read on her behalf during the opening of Fourth Annual General Meeting of the West African Action Network on Small Arms which attracted members of the organization from countries in the sub-region.

She expressed concern about the threat of terrorism, activities of insurgent groups and criminal gangs, which continued to occur in parts of the sub-region, particularly in the Sahel region and North Eastern part of Nigeria.

'These challenges are partly attributable to the porosity of our national borders, weak stockpile systems coupled with increasing sophistication of artisan local arm manufacturers,' she said.

She intimated that the relevant provisions of the ECOWAS Convention on SALW were very clear on these issues, and called on all member-countries and development partners to help address them.

She said the ECOWAS Convention on SALW, ammunitions and other related materials came into being in September 2009, and had remained a success story for the region, as the unique legally binding document that controls SALW.

'These successes would not have been achieved without the strong contributions being provided by Civil Society Organizations in the region', she added.

Mrs Suleiman said over the years, the Commission had supported member-states, through their National Commissions on Small Arms and CSOs, with office equipment, training on modern methods of arms control, as well as promoted cross-border collaboration and information sharing.

She commended WAANSA for its continuous support to National Commissions on Small Arms in the various countries in the sub-region as it had gone a long way in the fight against the proliferation of SALW.

Mrs Adelaide Amo-Kumi, Chief Director, Ministry of the Interior, appealed to Governments in the sub-region to collaborate with CSOs as they played a tremendous role in ensuring of peace and security in the sub-region.

She said Ghana as a country had demonstrated its commitment towards the fight against the proliferation and the misuse of SALW by the ratification of the Arms Trade Treaty (ATT), adding that the country was about to process depositing the ratification instrument at the United Nations.

'We also take a critical view of marking and record keeping of small arms, with the establishment of a national database on SALW in conformity with the ECOWAS Convention on Small Arms and Light Weapons', she added.

She urged civil society organizations to collaborate with government before, during and after the general elections slated for 2016 to ensure peace.

Mr Baffour Dokyi Amoa, President, WAANSA, said the main aim of the organization was to ensure peace and security, and also fight against the proliferation and misuse of SALW, and its negative impact on the sub-region.

'WAANSA has remained committed to ensuring that Governments in West Africa do not sleep over this matter especially given the escalation in gun violence and terrorism around the world', he said.

He said the two-day meeting which formed the General Assembly and also the highest decision making body, discussed issues pertaining to how to fight the proliferation of SALW in the sub-region, as well as review it activities and also elect new officials.