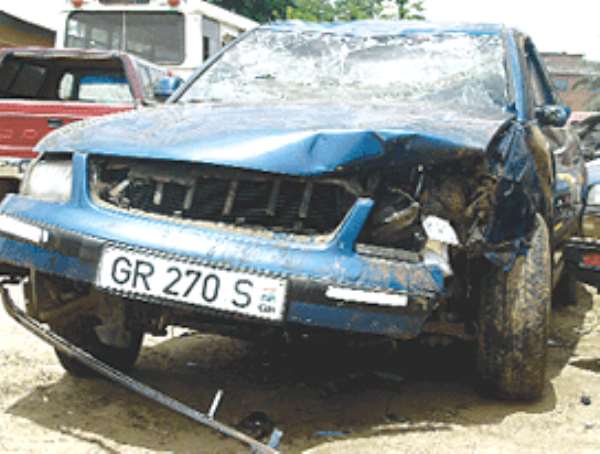 The National Democratic Congress (NDC) yesterday escaped a terrible casualty when the almost lifeless body of Alhaji Mohammed Mumuni, the party's Presidential running mate, was dumped at the reception of the 37 Military Hospital, following a brutal accident which nearly seized his life on the Atomic Junction-Haatso road in Accra.

Alhaji Mumuni, who is also an NDC Member of Parliament for Kumbungu, was rushed to the hospital by two Good Samaritans consisting of a taxi driver and a Nigerian who hardly knew his political status.

The only two eye witnesses, Chukwu Nwosu and the taxi driver, were unanimous in their testimony that at the time they arrived at the accident scene around 3.45am Alhaji Mumuni's car had somersaulted into a big gutter under a bridge and was lying in a supine situation with the four wheels facing the sky.

According to Mr. Chukwu Nwosu, he was walking by the roadside when he saw a car light flashing under the bridge so he approached the scene where he saw a man lying unconscious in the mangled car.

Mr. Chukwu said when he realized that somebody had been trapped in the car, he rushed to a nearby taxi station where he succeeded in getting a taxi driver to rush Alhaji to the 37 hospital where he received immediate medical attention.

Soon after he was admitted to the hospital, Alhaji's condition was described by insiders as serious as he was still unconscious with fractures in his leg and hand. But by midday, when he was transferred to the Intensive Care Unit of the hospital, he was said to have regained consciousness.

Even though the exact time of the accident and where Alhaji Mumuni was going or coming from around that odd time remain unknown, family sources said yesterday that he left the house around 3am, shortly after he had spoken to somebody on the phone but at the time of leaving the house his family including his wife were not aware of the exact place where he was going.

Initial rumors indicated that Alhaji was on his way to the mosque, claim which was rubbished as fast as it started. Prof. Mills has said that he couldn't be going to the mosque at such an odd time and that no mosque could be opened around that time.

Meanwhile, senior NDC officers were murmuring that the accident could have been caused by an unnatural manipulation and expressed their displeasure with the speed at which the Madina Police toed the accident vehicle from the scene of the accident. But so far there is no evidence was caused by strange circumstances.

The Chronicle gathered that the party's intelligence has already began their own investigations into the incident starting with clues about who and which phone number called him around the time, where he was going or coming from and possible clues as to what caused the accident, whether he was sleep-driving or was a hit and run accident.

So far, the Madina police has not and could not comment publicly on why they accident car was towed from the accident scene just moments after it occurred especially when it did not cause any traffic on the road and also when investigations were barely underway.

Prof. Evans Atta Mills cut short his tour of the Ashanti region to visit his running mate at the hospital.