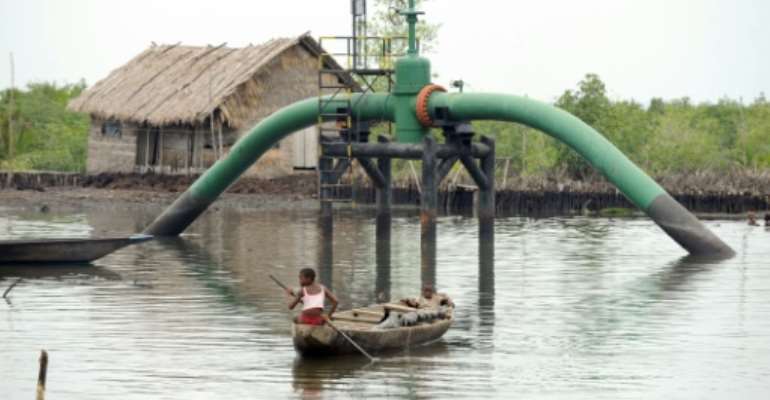 Nigeria produces some two million barrels of crude oil a day but despite its huge reserves, the country imports much of its fuel due to a lack of refining capability -- a situation blamed on corruption and mismanagement. By Pius Utomi Ekpei (AFP/File)

Lagos (AFP) - The new head of Nigeria's state oil company said on Thursday the country's fuel subsidy was an unsustainable drain on the economy, calling for deregulation of the oil and gas sector.

Nigeria produces some two million barrels of crude a day but despite its huge reserves, the country imports much of its fuel due to a lack of refining capability -- a situation blamed on corruption and mismanagement.

To make fuel affordable, Nigeria has frozen the price of a litre of petrol at 87 naira ($0.44, 0.39 euros), lower than the market rate. Fuel importers expect subsidy payments from the government to make up the difference.

When the government does not pay, fuel runs scarce, frequently causing gridlock and panic, and the subsidy programme has been found to be rife with corruption, including false claims and overpayments.

"Subsidy accounted for 20 percent of the federal government budget in 2013," said Kachikwu, appointed earlier this month by President Muhammadu Buhari to spearhead reforms in the corruption-hit oil sector.

The government ended fuel subsidies in 2012 but was forced to partially reinstate them when petrol prices more than doubled, causing violent mass protests that left more than a dozen dead.

Nigeria spent more than five trillion naira ($25 billion/22.5 billion euros) on fuel subsidies between 2006 and 2012, Kachikwu said in the speech read out in his absence to a conference of energy correspondents.

The Harvard-trained lawyer called for "speedy implementation" of deregulation in the sector which he said would encourage investment.

Nigeria is Africa's largest oil producer, with 37.4 billion barrels of crude in its reserves.

Crude accounts for more than 90 percent of Nigeria's export earnings and about 80 percent of federal government revenue, Kachikwu said.