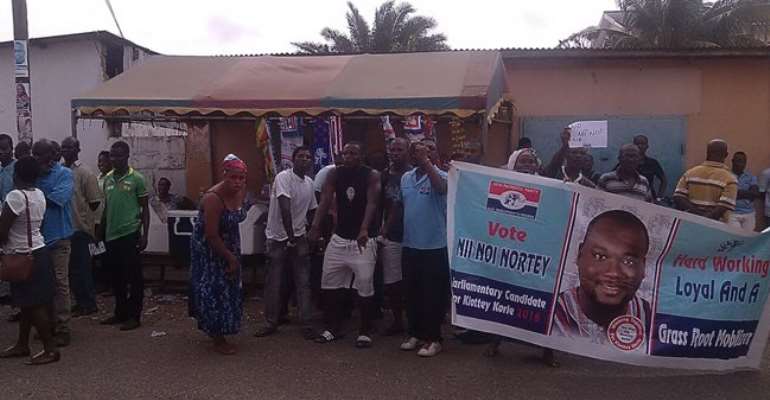 Scores of supporters of two aspiring Members of Parliament have besieged the head quarters of the New Patriotic Party in a last gasp attempt to have their candidates passed for Saturday's parliamentary primaries.

Carlos Ahinkorah contesting for the slot of Tema West and Nii Noi Nortey for Korley Klottey have both been disqualified in a preliminary vetting held in their respective constituencies.

But at the party's headquarters, Thursday, is a final meeting by an appeals committee to take a second look at the basis for disqualifying the two aspirants.

Nii Noi Nortey has been accused of submitting a fake certificate from the University of Ghana.

The fate of the two men hangs menacingly in the hands of the appeals committee members but their supporters are not living any stone unturned to have them passed.

And they came with threats, demands and accusations. The supporters believe Naa Torshie and Philip Addison both of whom are contesting the Tema West and Korle Klottey constituencies respectively are behind the disqualification of their candidates.

With placards and chants the supporters want their candidates passed for Saturday's primaries or they will not vote for the NPP candidate in the 2016 elections.

Joy News' Kwakye Afreh Nuamah says the committee members are deep in deliberations on the matter and will soon come out with a decision.

One of the embattled aspirants Nii Noi Nortey later told Afreh he had been cleared by the Appeals Committee and would contest the primaries. Even though the party is set for its primaries on Saturday July 13 to elect new Members of Parliament, Nii Noi said the part has decided to have that of Korley Klottey on the 27 June, 2015.

Members of the Appeals Committee are yet to confirm this detail.

Latest Photo Reports
Catch up with all the political quotes from our politicians.
Advertise here
More NPP News
ModernGhana Links
The key to NPP breaking the 8 is with the delegates — Ben Ephson
Asabee’s communication prowess will help us in 2024 — NPP stalwart
Akufo-Addo calls for flawless, level playing field in choosing NPP’s flagbearer
Komenda factory: NPP used $25million to produce Akpeteshie instead of sugar — Cape Coast North MP
Your dictatorial, political bloodshed will be responded, we dare you to try — Otokunor blasts Lord Commey over NPP power transfer comment
Where’s your Komenda Sugar factory money? – NPP’s Agyemang Sarpong asks Mahama
It's either we change leadership in Ashanti or we forget 2024 — NPP Delegates advised
"Greater Accra NPP is poised to recapture all lost seats in 2024" — Chairman Divine
With TESCON, nothing can stop NPP from 'breaking the eight' – Kwadaso MP
TOP STORIES