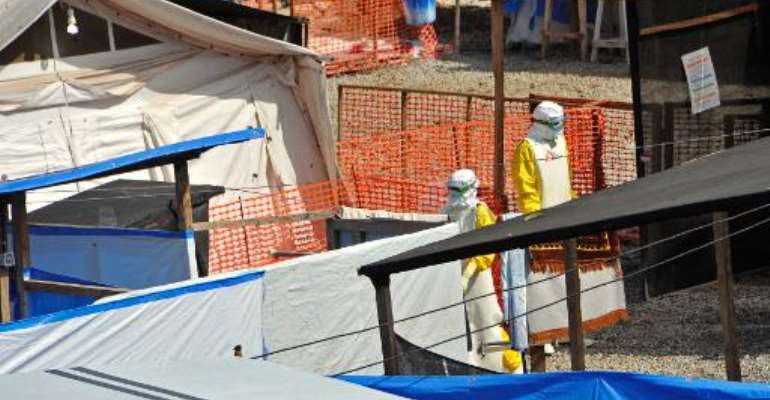 Workers wearing protective suits are pictured at the Donka Ebola treatment center on May 2, 2015 in Conakry. By Cellou Binani (AFP/File)

Geneva (AFP) - The number of Ebola cases has risen in Guinea and Sierra Leone for the second consecutive week, the World Health Organization said Wednesday.

In Guinea, 16 new cases were found in the week ending June 7, with 15 more found in neighbouring Sierra Leone.

In the previous week, 13 new cases had been found in Guinea, a clear increase on the nine reported a week before that.

The pattern was similar in Sierra Leone, where 12 new cases were found in the last week of May compared to only three the previous week.

"This is the second consecutive weekly increase in case incidence," the WHO said.

The number of health workers affected in Sierra Leone, Guinea and Liberia has risen to 869, of whom 507 have died, since the current epidemic broke out in west Africa in December 2013

Liberia was declared Ebola-free in May, but hopes that Sierra Leone and Guinea would quickly follow suit have been dashed in recent weeks.

The global health agency also voiced concern that the areas affected in Guinea have increased.

In the week leading up to June 7, two new cases were confirmed in Guinea's capital Conakry, which had been Ebola-free during the three previous weeks.

The virus also reappeared in the western Guinean region of Kindia, with three new cases identified there.