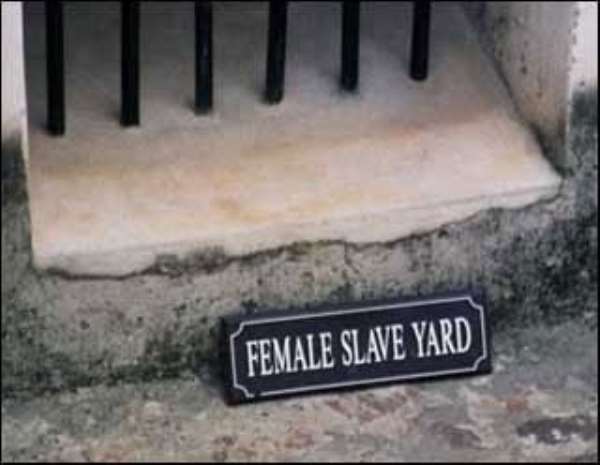 Accra, Aug. 30, GNA - Vice President Aliu Mahama on Monday described the slave trade as a black hole in history and said it had influenced global development and human rights in today's world. According to him, the difficulty in also placing the Trans-Atlantic Slave Trade in world history was closely linked to the problems of understanding and explaining the historical origins of the contemporary world economic order.

Speaking at the opening of a four-day international conference on the Trans-Atlantic Slave Trade, which is on the theme, "Landmarks, legacies and expectations," the Vice President said: "Indeed, the repercussions of horror and suffering engendered by slave raids, wars, and devastation cannot be described adequately in words."

The conference marks part of the proclamation of 2004 as the international year to mark the struggle against slavery and its abolition by the United Nations General Assembly.

Scholars, researchers, representatives from the West Africa sub-region, Africans in the Diaspora and other participants from Africa, Europe and America are attending the conference organised by the Ministry of Tourism and Modernisation of the Capital City, in collaboration with UNESCO.

Research papers are expected to be presented, which would bring to the fore the truth surrounding the horrors of slavery to serve as a basis for the charting of a future, which would bring about reconciliation, healing and forgiveness.

The Vice President said: "The true story of the slave trade can no longer be suppressed or swept under the carpet."

"While we still search for the truth, we should at the same time, attempt to find the medicine to heal the deep wounds and scars that have been inflicted by the slave trade."

He said Ghana supported UNESCO's quest for a "healing process that would mollify the bitterness among Africans and people of African descent".

"The only way to heal the wounds of this unparalleled tragedy is to ensure that we avoid its recurrence in any form."

The Vice President tasked the participants and the organisers to disseminate the outcome of the conference through publications, seminars and teaching programmes in schools in order to place the slave trade in context to help improve upon human rights in the communities.

He said the forum should serve to draw attention to a new form of slavery, which had emerged in the form of abduction of women and children into foreign lands to engage in forced and degrading labour.

He also called for the reintegration and relocation of Africans in the Diaspora to the motherland, saying Ghana would lead the way through the African Union, the New Partnership for Africa's Development and the ECOWAS.

This, he said, was for the adoption of a common approach in "inviting our brothers and sisters in the Diaspora to relocate to their roots".

Mrs Elizabeth Moundo, UNESCO Representative in Ghana, said the conference should discuss the modern forms of slavery, which were closely linked to sex slavery and human trafficking.

Mr Arie Van Der Wiel, the Netherlands Ambassador to Ghana, said the Dutch and Ghana government were working on strengthening their common past through the establishment of a cultural heritage policy framework signed in May this year.

He said the principal aim of the policy was to foster the sustainable "preservation of the mutual cultural heritage in Ghana and the Netherlands". Let's unravel the full facts about the slave trade, but let's move on - Aliu Accra, Aug. 30, GNA - Vice President Aliu Mahama on Monday told scholars and historians gathered in Accra to establish the absolute truth to end the controversy over the slave trade, while concrete means were found to appease the victims of what the Pontiff described as the "Holocaust of Africa Peoples."

"The true story of the slave trade can no longer be suppressed or swept under the carpet," he said.

"While we still search for the truth, we should at the same time, attempt to find the medicine to heal the deep wounds and scars that have been inflicted by the slave trade," he said, at the opening of the Conference on Slave Trade in Accra.

Vice President Mahama noted that the various accounts of the slave trade had been variably unacceptable to the different participants in the trade because myopic interests and perceptions had influenced these stories.

"The controversy surrounding the subject arises firstly from the differing thought patterns of scholars whose perspectives on the slave trade depend on their race as well as their backgrounds and where they are coming from.

"The second borders on the intrusion of political influences into scholarly explanations; while the third is the inadequate information at the disposal of scholars. These factors, among others, continue to cloud the understanding of the slave trade and its impact on world development."

Vice President Mahama, therefore, tasked the 30 intellectuals who were meeting in Accra to make their conference the melting pot for the various studies that have been conducted on the subject. "The world would be better placed to heal the wounds of the victims if all the dimensions of the Trans-Atlantic Slave Trade are fully understood," he added.

The four-day conference, under the theme, "The Transatlantic Slave Trade- Landmarks, Legacies and Expectations," marks part of the proclamation of 2004, as the international year to mark the struggle against slavery and its abolition by the United Nations General Assembly.

Scholars, researchers, representatives from the ECOWAS sub-region, Africans in the Diaspora and participants from the continent, Europe and America are attending the conference, organised by the Ministry of Tourism and Modernisation of the Capital in collaboration with UNESCO.

Nene Drolor Adamtey I, Development Chief of Ada, said modern African-American and Caribbean Diaspora accuse the ancestors of modern native Africans as being the initiators and collaborators responsible for the crime of the slave trade.

"At various conferences and seminars on the slave trade they have vented their anger because the forts and castles and other slave trade relics are being commercialised and used to promote tourism when, in fact, they should be memorialised as sacred sites," he said. On the other hand, Nene Adamtey said, modern native Africans were of the view that the ancestral European nations who organised and financed the slave traffic must be held liable because they used economic and military coercion to intimidate local people into supply of slaves willy-nilly.

However, Nene Adamtey said, contemporary Europeans admit having financed and promoted the triangular trade by massive importation of manufactured goods and firearms.

They contend that they confined themselves to their trade forts on the coasts and that the real dirty business of raids, capture and marketing of slaves was done by chiefs, warlords and native capitalists. Nene Adamtey stressed that the compromise position would be for all stakeholders to share the blame and move on.