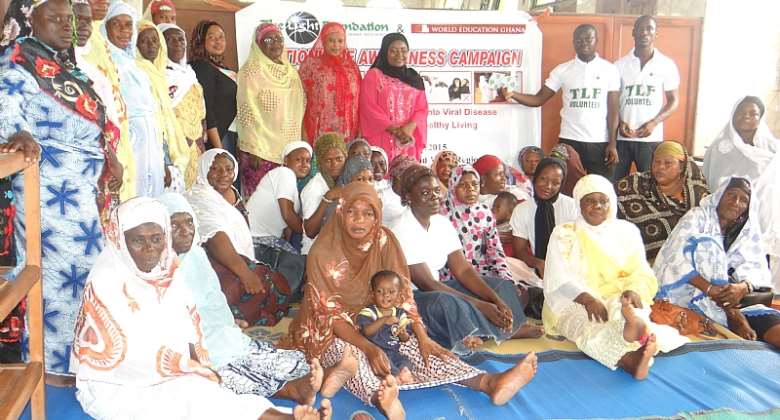 The Light Foundation, Ghana (TLF) has join hands with the World Education Ghana to get 5,000 Muslims within some selected Zongo Communities located within the Greater Accra and Volta Region sensitized respectively on the deadly Ebola Virus Disease in Ghana.

The two months project which is themed: “Embrace hygiene and Say no to Ebola” has already begun in some Zongo communities within the Greater Accra Region, aiming at stopping at nothing to get rid of the deadly Ebola Virus (EVD) out of the country.

It is perfect initiative being rolled out by The Light Foundation Ghana (TLF) and supported by the World Education Ghana, equally seeking to prevent Cholera outbreak, encourage the practice of ensuring proper hygiene among residents living within the selected Zongo Communities.

In reality, under the 2 months Ebola sensitization project, five thousand Muslims are targeted to be sensitized on Ebola prevention through community outreaches with audio messages on CDs in eight local languages; Hausa ,Twi, Ga, Ewe, English, Dagbani, fante and others.

In order to achieve desired result under the project TLF Ghana will employ the following strategies including; strengthening the capacity of Imams and other stakeholders to implement mosque based Ebola prevention sermons using the audio material, encouraging Imams and MBC members to play audio material before and after spiritual activities and to gather and reach out to Muslim groups and women groups in selected communities.

The on-going exercise which is being implemented under the project has already yielded result within some Zongo Communities situated in the Ayawaso East and West Constituency respectively within the Greater Accra Region.

This has become possible due to much emphasis laid on vigorous sensitization on Ebola Virus Disease (EVD), Cholera prevention and other health related diseases through proper sanitation practices and promotion of good hygiene to achieve healthy lifestyle.

At the Kardor Mosque, located in Nima under the Ayawaso East, Accra, a women’s group known as Nasiyil Rawdatul, were among several groups taken through basic steps of Ebola prevention, and Cholera with emphasis on maintaining clean environment and proper hygiene.

The group members were also introduced to hand washing demonstration to serve as a tool to guard against diseases and to promote good personal hygiene practice for healthy living.

In addition to the meaningful presentations on Ebola prevention, each participant received audio CD containing messages in local Hausa language to serve as a guide to them in their homes.

Among the participants includes Peer Educators from different focus groups who previously got trained in a separate forum organized by The Light Foundation, Ghana as part of its massive thirty-six weeks (36) Nationwide Ebola Campaign Program of getting rid of the deadly Ebola Virus Disease from entering into Ghana.

The Leader of Nasiyil Rawdatul group, Hajia Fatmatu Mohammed Watara, popularly known as Hajia Dangana, commended TLF Ghana and The World Education Ghana for the glorious sensitization campaign initiative which has open their eyes to the light in a darkened world.

“Such a wonderful overture should be replicated across the whole Ghana so that people will know the truth about life” she said.

She also pledged her outfits support in reaching the populace with the good message, calling on her group members to reflect the measures and the right attitude to a healthy lifestyle they acquired through the training program.

The Programme Manager of TLF Ghana, Hawa Suleimana Issah, resource person of the sensitization program said getting rid of Ebola from Ghana at all cost is the greatest objective of The Light Foundation Ghana.

She said: “it is crucial for people to live in good health at all times, hence the need for the sensitization exercise on the practice of good hygiene, adoption and promotion of the proper healthy life style which is paramount and key to healthy living.

She urged the participants to be agents of change in their various communities through adoption and practice of a positive behavioural approach to life and help send the message across to others in the society.

According Hawa Suleimana Issah, in an interview with newsmen in Accra just after the close of a sensitization exercise, explained about 2,000 Muslims have been sensitized so far within some of the mosques under the project in the Greater Accra Region, including Alhaji Norgah Central Mosque, Alhaji Fatawu Mosque, Kardo Mosque, late Jamalu Baba Mosque and others within Ayawaso East and Central Constituency.

She announced plans are currently underway by her outfit to get several mosques situated in Ho and Adaklu Zongo Communities in the Volta Region sensitized on the Ebola prevention under the phase two of the project.

TLF Ghana is a not-for profit Organization spearheading the Nationwide Ebola Awareness Campaign in Ghana, committed to get rid of Ebola from Ghana through active campaign in six regions namely Greater Accra, Western, Eastern, Central, Tamale and Upper East Region which saw most people sensitized on the prevention of the disease including those leaving within the “risky zones”.

The outbreak of the deadly Ebola Virus Disease (EVD) has killed more than 9,500 people so far in three worst-affected West African Countries, including Liberia, Guinea and Sierra Leone, but recorded a remarkable reduction in the past months.

Ghana is lucky to have recorded not even a single case yet since the outbreak last year, despite registering a total of 140 suspected cases in the country between March, 2014 till date at the Noguchi Memorial Institute which has proved futile.

But the World Health Organization (WHO) believes the outbreak still remains a threat to Ghana due to the porous nature of Ghana’s borders, people now eating bats; a major transmitter of the Ebola Virus and also fond of shaking hands during social events which could easily spread the virus.

They therefore urged the government to scale up its preparation against possible outbreaks in the future.

A POSE WITH MUSLIM WOMENS GROUP AT KARDOR MOSQUE(1)

HAWA ISSAH, PROGRAMMES MANAGER, TLF GHANA IN POSE WITH SOME WOMEN LEADERS AT THE KARDOR MOSQUE