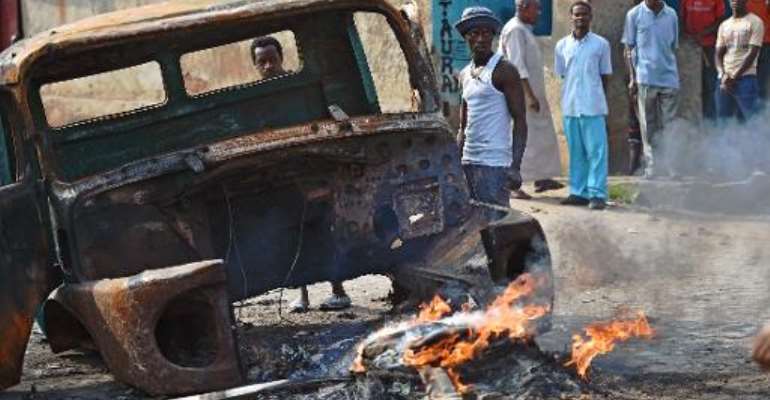 Protestors opposed to Burundian President Pierre Nkurunziza's third term stand beside a burning vehicle during a demonstration in the Buyenzi neighborhood of Bujumbura on May 26, 2015. By Carl De Souza (AFP)

Bujumbura (Burundi) (AFP) - Police in Burundi on Friday shot dead a protester in the capital amid renewed demonstrations against President Pierre Nkurunziza, witnesses and a local official said.

Residents in Bujumbura's Musaga district, which as been at the centre of protests against the president's controversial bid to stand for a third term, said a group of around 200 people tried to gather in the area to kick-start the flagging protest movement.

They said police opened fire to disperse the group, and that one man was hit in the chest and died while being treated by the Red Cross. A local official confirmed the death, describing it as "unfortunate".

Close to 40 people have died in protests that began when Nkurunziza announced in late April that he would stand again. Opponents say his candidacy is unconstitutional and goes against the 2006 Arusha peace deal that ended 13 years of civil war.

Nkurunziza survived a coup attempt last month and has since ignored international pressure, including aid cuts, aimed at forcing him to reconsider.

On Wednesday the presidency said parliamentary polls that were scheduled for today would be postponed. The presidential election is still on the calendar for June 26.