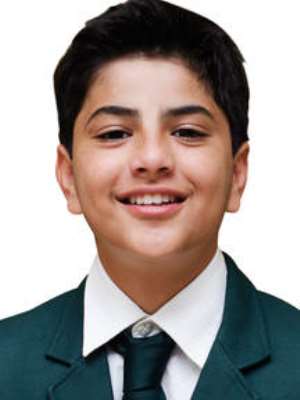 After emerging champion at this year’s national finals of the Spelling Bee, the third consecutive win for the Delhi Public School International (DPSI), thirteen year old Vishal Mukesh Thakwani is poised to make Africa proud in the “Scripps Spelling Bee” in the United States.

Ghana is the only African country eligible to participate in the 88th “Scripps Spelling Bee”. Vishal, a 7th grader of DPSI has undergone months of rigorous strategic training to sharpen his remarkable spelling prowess. With over 400,000 words under his sleeve, he believes he can beat 284 other spellers from different countries to make history for schools in Africa.

Stiff competition is expected from Vanya Shivashankar from Kansas who will be competing for the fifth time.

Under the sponsorship of the Young Educators Foundation (YEF) who coordinates the Spelling Bee in Ghana, Vishal will leave the country this week to join his colleagues in Washington D.C. for the three day fun packed educational event from Tuesday 26th May to Thursday 28th May, 2015.

In an interview with the media, a confident Vishal disclosed that the experience he has gathered so far will propel him to win the ultimate prize in the United States.

“Yes I hope to win. I feel a little nervous when I realize that I’m representing Ghana and Africa but I just take it as a normal participation in an international competition. I hope to give the best which the country has ever produced,” he added.

Spelling has boosted young Vishal’s vocabulary and learning abilities leading to an improvement in the way he studies other difficult subjects. Vishal has set his sight in the footsteps of his father to be a business magnate in the future.

In her comments, Country Director of YEF, Mrs. Eugenia Tachie-Menson said the Ghanaian educational system is not flexible to such extra programmes that could transform the lives of students and the acceptance of the spelling bee especially in public schools has been appalling.

She commended DPSI for creating extra-curricular activities that speeds up the developmental process of students.

Funding has been a major challenge for YEF in its nine years of operation and the director is appealing for more support for future educational programmes that will boost the quality of learning.

According to her, the spelling bee will give the country a very good international publicity and will groom children to be global ambassadors.

“I think he is ready, the three year participation in the local spelling bee has given him some level of maturity and he is hungry for success. People should look out for him in the international finals because he will make history”.

Director of DPSI who is father to Vishal, Mr. Mukesh Thakwani was full of excitement at the prospect of his son being the beacon for Africa at the global competition.

“It’s a proud moment for us as a family and we are confident that he will go past the level of our previous students who have participated,” the elated parent indicated.

He was grateful to YEF for the opportunity given to schools in Ghanaian that gives exposure to students in all aspects of their lives beyond spelling.

He thanked his family especially Mrs. Tanya Mukesh, the mother of Vishal, the spelling bee coaches and the school principal for their immense support.

The Director says DPSI is committed to holistic education beyond academic work in the classrooms to ensure that the school churns out global leaders who will be effective in any field.

On his part, The Principal of DPSI noted that Vishal has become a master in spelling and has learnt how to tackle every word. Winning the national competition came as no surprise to Mr. David Raj who is confident that Vishal Thankwani will repeat the success at the world stage.

Head of Department for English at DPSI and Spelling Coach for Vishal, Mrs. Helen David commended the young speller for his outstanding efforts over the years.

She says Vishal has been able to grasp most of the concepts regarding spelling and should be able to make a mark in the world round.

DPSI received an international award for being an outstanding school in Ghana by the World Confederation of Businesses (WORLDCOB) for its holistic education and state-of-the-art infrastructure.

The school also emerged victorious in the last International Mathematical Olympiad with more than 2400 participants.