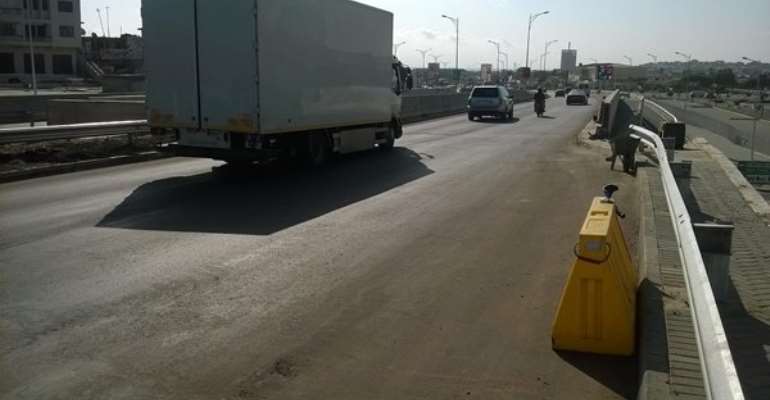 Scheduled asphalt surfacing of the southern deck of the West Hills Mall Interchange was completed last Monday bringing relief to commuters and motorists who ply the east-bound Kasoa-Mallam highway.

The Contractor, High Brains Limited, used post rush-hour periods on Sunday and Monday to complete the surface asphalting on the southern deck of the dual carriage interchange to give motorist a smooth transition from the main road across the bridge, according to Project Manager Mr. Walter Segbedzi.

A rough bump which developed across the transition point between the road and the bridge impeded the flow of traffic, as motorists had to slow down to navigate their way over the bump, causing serious traffic jams which, on Wednesday May 6th, extended as far as to the Weija Toll Booth near Kasoa.

Explaining what resulted in the traffic build up, Mr Segbedzi said, “What happened on May 6 was rather unfortunate. An expansion joint was placed at that location and while the deck was still awaiting final asphalting, heavy traffic resulted in a high bump right at the transition point between the road and the bridge, compelling cars to slow down.”

He said asphalting of the southern deck was expedited last Sunday and yesterday in order to bring relief to commuters and motorists who, he said, have displayed commendable understanding and patience at all the stages of the interchange project.

Last Sunday, the contractor, with the help of the District Police Command, began asphalting the inner lane of the southern deck and yesterday, switched over to the outer lane to complete the full stretch across the bridge, now enabling all categories of vehicles to run across the bridge at normal speed and with unimpeded ease.

“We take the safety and convenience of motorists very seriously. Now that we have asphalted the decks, what we will do next is to do the road markings to clearly define the two lanes on each deck to guide users of the bridge. This could be done next week,’’ said Segbedzi.